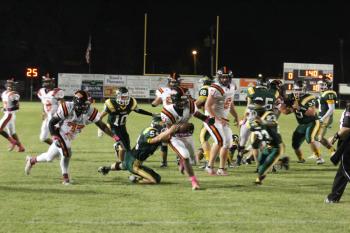 MAMOU – Like a big jungle cat, the Pine Prairie Panthers pounced on three early Mamou Demon miscues and converted them into points, as they rolled to a 42-8 District 5-3A win here Thursday night.
The night began eerily similar to the Demon’s loss to Iota last week, when Mamou fell behind to the Bulldogs 34-0 in the first quarter. On Thursday, déjà vu filled the air, with the Panthers taking a 22-0 lead after one period of play following an interception, a fumble recovery and a safety, all occurring on the Demon’s first three possessions.
With the win, Pine Prairie is now 3-3 on the year and 2-1 in district play. Mamou fell to 1-5 on the season and 1-2 in district.
“Being two and one in district is so big for Pine Prairie football,” said an elated Panther head coach Yves Prince. “Now we have four tough teams left in district, but I believe we can play with anyone of them. Great job by both our offensive and defensive units. We took advantage of their mistakes and were able to put up points early. I really thought we came out focused on the task at hand.”
“Not turning the ball over is something that we preach on every week,” said a disappointed Demon head coach Brian Brumfield. “It is so crucial for us to not give up the ball, especially in our territory. When that happens teams will take advantage and give credit to them (Pine Prairie), they did that tonight. I don’t know if we were mentally quite ready to play. There seems to be a mental aspect of the game that we are lacking right now.”
The miscues began right from the start for the Demons. After a 13-yard loss on Mamou’s very first play of the night, the Demons tried to fool the Panthers by throwing a toss pass. However, Pine Prairie cornerback Isaiah Payne came down with the ball at the Panther 46-yard line for the interception.
Pine Prairie then began what would be an occurring theme of the night; total domination on the line of scrimmage.
The Panthers methodically carved the Demon defense up with run play after run play and finally hit pay dirt 10 plays later, when JJ Sims plunged in from seven yards out for the first score of the game. Landon Johnson nailed the extra point and with 6:58 left in the opening quarter, Pine Prairie led 7-0.
The mistakes continued on Mamou’s second possession. Facing a third-and-15 on the Demon 25-yard line, the ball was snapped over the quarterback Daylon Ardoin’s head, who then proceeded to kick the ball out of the back of the end zone, resulting in a safety and a penalty. That gave the Panthers a 9-0 lead with 5:42 to go in the period.
With the penalty, Mamou was forced to free kick the ball from their 10-yard line. After the reception and the return, Pine Prairie took over at the Demon 28-yard line. Four plays later, Sims had found the end zone once again, this time from five yards out. Johnson tacked on the extra point and the Panthers now led 16-0 at the 3:45 mark of the initial quarter.
The final miscue of the first quarter for Mamou came right after the ensuing kickoff. On the first play of their third possession, the Demons coughed up the ball at their 33-yard line, where Pine Prairie recovered the loose pigskin.
Another short six play drive resulted in a 10 yard Sims touchdown run. A bobbled snap on the extra point caused the point after to fail, but the Panthers now held a 22-0 lead with only 1:27 left in the quarter.
The two teams exchanged possessions to begin the second quarter. On its second drive of the period, Pine Prairie opened the game up even wider, as Sims took a BJ Ardoin handoff on the fourth play and galloped 68 yards for the score. The extra point was wide left. However, the Panthers had expanded the lead to 28-0 with 3:35 left in the half.
That score stood until the two teams headed for the locker room.
It was not until the first play of the final quarter before Mamou was able to put its only points of the night on the board. After taking over at the Pine Prairie 43-yard line late in the third quarter, the Demons produced a seven play drive that ended in a Tyrin Williams one-yard spinning dive over the goal line on the initial play of the fourth quarter. The two- point pass fell incomplete, making the score 28-8 in favor of the Panthers.
Pine Prairie would end the night with two more scores, a 10 yard run by Sims and a 17-yard jaunt by Darrien Hayes.
On the night the Panthers rushed for a total of 384 yards on 60 carries, with Sims accounting for 194 of those yards on 19 rushing attempts. Hayes collected 117 yards on 21 carries.
Mamou produced only 96 total yards on the night, mostly because of a suffocating Pine Prairie defense.
The Panthers will host the Eunice Bobcats Friday night, while the Demons travel to Crowley to take on the Gents.