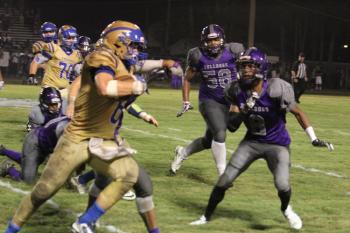 Sacred Heart running back JT Harper (6) rushes around the right side, as Ville Platte High’s Kaybrien Ardoin (8) and Davondez Doucet (58) give chase. Harper rushed for 113 yards on 18 attempts, earning him MVP honors for the Trojans in Tee-Cotton Bowl XIV. (Gazette photo Nicholas Jagneaux)

VILLE PLATTE -- The Halls of Troy reign supreme once again in the City Championship gridiron classic, as the Sacred Heart Trojans ran past the Ville Platte Bulldogs 40-19 here Friday night to take home the Tee-Cotton Bowl XIV title.
In the game, Sacred Heart rushed the ball for 159 yards on 36 carries and scored four touchdowns. Most of those rushing yards came from Trojan MVP JT Harper, who collected 113 yards on 18 rushing attempts and produced three touchdowns on the ground.
However, after the game, both coaches acknowledged the real Most Valuable Players of the game was the entire Sacred Heart offensive line.
“No doubt, those guys up front were a big reason for the way the game ended up,” stated Trojan head coach Josh Harper. “I don’t think we had very many negative running plays the entire game. As a unit they have been getting better and better, and if they do that, we will be in great shape.”
“The offensive line for Sacred Heart did a brilliant job,” said Ville Platte head coach Jorie Randle. “I know JT (Harper) was named the MVP, but if I had a vote or a say so it would have definitely been the offensive line.”
After the fanfare of the pre-game had settled down, the game began with the Bulldogs receiving the opening kick off. Ville Platte was not able to get much going on their first possession and was forced to punt on fourth down.
Sacred Heart did not waste time getting on the board after hauling in the punt at their 41-yard line. Coming out in their spread package, the Trojans picked up small chunks of yards on their first eight plays.
But, on the ninth play of the drive, Trojan quarterback Wesley Launey found Harper on a wheel route down the left sideline and the duo combined for a 33 yard pitch and catch for the score. The extra point attempt by Alec Gotro was no good, but Sacred Heart led 6-0 at the 5:34 mark of the first quarter.
On Ville Platte’s ensuing possession, the Bulldogs took over at their 28-yard line. On the second play of the drive, running back Jaishaun Doucet hit wide out Kaybrien Ardoin for 63 yards on a sweep pass, setting Ville Platte up at the Trojan nine-yard line.
Unfortunately, the Bulldogs could not capitalize, as they fumbled the handoff, and Sacred Heart pounced on the ball at their 11-yard line.
The Trojans took advantage of the situation and scored their second touchdown of the game on the second play of the possession. This time it was a simple flat pass from Launey to Gotro that did the damage, as Gotro raced 90-yards to paydirt. The two-point run by Harper was successful and at the 3:39 mark of the first quarter, Sacred Heart led 14-0.
The Bulldogs were able to move the ball all the way down to the Trojan 24-yard line in five plays on their ensuing possession. But, another miscue on the handoff killed the Ville Platte High drive.
The Bulldogs did not let their second fumble of the night damper the mood. After forcing Sacred Heart to punt, Ville Platte produced a scoring drive of their own. Using only six plays, the Bulldogs got on the board when quarterback Brandon Veazie scampered around left end for the score. The two-point pass attempt was no good, but Ville Platte had cut the Trojan lead to 14-6 with 6:10 left to go in the first half.
Sacred Heart showed they were not finished putting points up in the second quarter. The Trojans took over possession of the ball at their 33-yard line after the kick-off and began pounding the rawhide right at the Bulldogs.
Nine plays into the drive, Sacred Heart once again found the end zone when Harper plunged in from two yards out with 59 seconds left in the half. A two-point run attempt failed, but the Trojans now owned a 20-6 lead that they took into the locker room.
The two teams came out on the field to start the second half and looked sluggish on offense. After an exchange of punts, Sacred Heart took over at the Ville Platte 44-yard line.
Taking over from where they left off in the first half, the Trojans only needed four plays to hit pay dirt once again. On first and ten from the Bulldog 33-yard line, Harper raced down the left sideline on a sweep and strode over the goal line for his third touch down of the game with 6:44 remaining in the third quarter.
Harper tacked on the two-point run and Sacred Heart led 28-6.
The Trojans made the most of another Ville Platte High mistake, this time deep in Bulldog territory. After a fumble recovery at the Ville Platte 30-yard line, Sacred Heart powered their way to the end zone in six plays, capped off by a four-yard run by Launey. The extra point was no good, however, the Trojans now held a 34-6 lead.
Sacred Heart got the ball back almost immediately, as the Bulldogs threw an interception on the second play of their next drive. Dru Scully picked the ball off at mid-field and raced to the Ville Platte six-yard line. One play later, Harper was across the goal line once again. Another missed extra point gave the Trojans a 40-6 lead with one minute left in the third quarter.
Ville Platte tried to crawl back into the game, as Doucet scored on back-to-back possessions. The first score was a 43 yard run, while the second was a 77 yard gallop. However, it would not be enough to overcome the insurmountable Trojan lead.
“It was a tremendous atmosphere,” said Harper after his first Tee-Cotton Bowl experience. “And even though this is a big win against a great rival, the biggest thing for us is that it is the first win of the season. That will hopefully give us some confidence going into the rest of the year.”