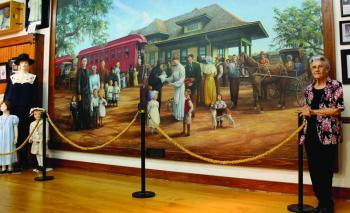 Louisiana Orphan Train Museum historian Flo Inhern poses in front of the Robert Dafford painting that depicts the arrival of the orphan train riders in Opelousas. The painting is on display at the museum. (Gazette photos by Elizabeth West) 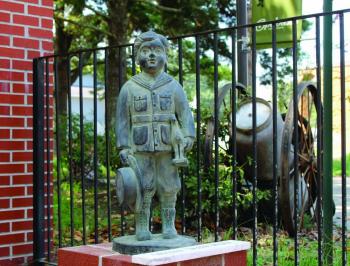 A statue of a young orphan train rider, holding a hat in one hand and toy horse in the other, stands inside the museum’s courtyard. (Gazette photos by Elizabeth West)

A statue of a young orphan train rider, clinging tightly to her doll, stands inside the museum's courtyard. (Gazette photos by Elizabeth West) 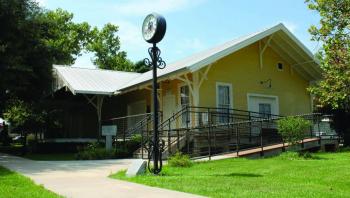 A visit to the Louisiana Orphan Train Museum in Opelousas allows one to discover a history that the museum’s historian Flo Inhern said “has never been put in the history books.”
Fittingly housed in an Old Union Pacific Warehouse Depot, the museum provides visitors with the chance to better understand the orphans who journeyed to Louisiana during the first three decades of the 20th century. This story is told through the many photographs and original pieces of clothing preserved and placed on display.
Reading the in-depth stories of the orphans’ journey south, and their life after arrival, will make you feel like you have personally known these people for years.
The 7 x 14 foot painting by Louisiana artist Robert Dafford depicting the arrival and pick up of these orphans in Opelousas hangs in the museum, which assists in creating a mental picture of this hidden part of Louisiana History.
At the beginning of the 20th century, immigrants in large numbers began arriving at Ellis Island. Upon arrival, many families realized they could not take care of their children, which led to nearly 250,000 children being abandoned. The Children’s Aid Society and New York Founding Hospital began making an effort to find homes for these children. This led to approximately 2,000 orphans being sent to Louisiana.
These children are first honored at the museum with a pair of statues in the courtyard outside of the depot. There is one statue of an orphan girl clinging tight to her doll, while another is of an orphan boy packing only his hat and toy horse.
Establishing the museum tells a story of struggle much like the stories of the orphans who made Louisiana their new home. According to Inhern, “Gathering information, stories, and artifacts for the museum has been nearly a 25 year struggle.”
Preserving the depot that would be used for the museum also proved to be a grueling endeavor. Inhern said, “There was a grant available that we could use to restore the building but it took us seven years to clear everything and receive the grant because of Hurricane Katrina.”
Preparing a building mirrored the long journey the New York orphans endured. After the long seven-year wait, the grant became accessible, allowing work to begin on restoring what would become the home for this forgotten local history. The depot’s restoration was completed in 2009.
A committee formed in 1991 began laying the frame work for the creation of this museum. Gathering of historical information on the orphans that traveled to this area was the first step the committee took in the process of creating a safe haven for the forgotten stories of some of our ancestors.
Gathering information on the orphans has been a tedious task. Inhern said, “We rely on the ancestors of these orphans to provide us with information because the hospital in New York has kept these files very secretive and will only allow either the orphan or a direct descendant of an orphan to receive any information.”
Difficulty receiving information on these orphans has made it tough to figure out how many of the 2,000 orphans that came to Louisiana were on the three trains that stopped in Opelousas in the spring of 1907.
When it came to gathering information locally, it did not get easier. “Information about the orphans was also kept secret here too because people did not talk about the fact that they were an orphan.” Inhern continued, “It was hard for them because of how much they were picked on by others. These people were told things like your mama didn’t want you.”
Inhern recalls stories of the orphans that her mother, who shared a school desk with orphan Christina Geitz West, had told her. “My mom had told me that she remembered Christina telling her that the reason she did not play with the other kids was because they picked on her, calling her a Yankee,” said Inhern.
Inhern’s father-in-law had also been an orphan that arrived in Opelousas in 1907 and then taken in by a Ville Platte family. She recalls the desire her father-in-law had to uncover his true genealogy.
Inhern said, “My father-in-law always said he just wished he could know the name of his parents and after much research, as he laid on his death bed, we provided him with the name of his mother. Laying there with his eyes closed, we told him his mother’s name and we know he heard because after we spoke the name a tear rolled down his cheek.”
It is this kind of impact that the Louisiana Orphan Train Museum strives to have on its visitors.
More than one hundred years ago when the first train arrived in Opelousas it was our ancestors that offered to many of these orphans a chance to experiencing an education, job, family, security, and love. Today, this museum relies on us to keep their stories alive.
The museum does not receive money from the state to help sustain it. Inhern said, “Financially we rely on the money we receive from entrance fees, donations, and memberships to fund the museum.”
When you visit the museum, you are given the option to walk through by yourself or have a tour guide show you around and inform you of the stories of the orphan train riders.
The knowledge the tour guides have on the information in the museum comes from their personal connection to the orphans. Every volunteer at the museum is a direct descendant of an orphan train rider.
Inhern said, “It is our mission at the Louisiana Orphan Train Museum to never stop collecting and preserving items that tell the orphan train riders’ stories. Even though I am 88 and legally blind, I will continue to work to sharing this history.”