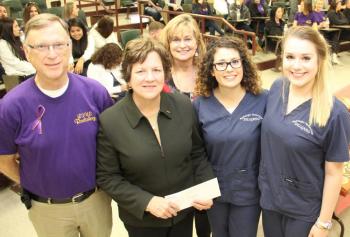 EUNICE — Voices still crack with emotion at LSUE when people talk about former radiologic technology student Mayci Breaux.
Breaux was one of two people killed and nine wounded in July at the Grand 16 Lafayette movie theater. The gunman killed himself after the rampage that lasted less than a minute.
Also killed in the shooting was Jillian Johnson, 33, of Lafayette.
Rob McLaughlin, radiolgic technology program director at Louisiana State Univeristy Eunice, spoke about Breaux Friday as a delegation from Delgado Community College visited the campus to donate $2,050 to a scholarship in honor of the slain student.
“She had a lot of ambition,” he said, his voice breaking with emotion. “She was aligned to go into ultrasound. That was her goal. Unfortunately, it was cut short at the end of her first semester last summer on July 23.”
McLaughlin said the donation Friday, like the ribbons and bracelets worn in memory of Breaux, “show how we respect her.”
The LSUE Foundation established the Mayci Breaux Memorial Scholarship in memory of Breaux, 21, of Franklin.
Katie May, co-president of her radiologic technology class at Delegado, said students sold $1 tickets for about three weeks in a raffle of a basket of NOLA-themed items.
The raffle included gift certificates to restaurants, tickets to venues such as the World War II museum and Saints items.
“We are really proud of what we were able to accomplish in three weeks,” she said.
Breaux’s murder hit close to home for the students, she said.
A few weeks before the shooting, radiologic technology students from across the state had gathered in Lafayette for a meeting, she said.
May, who is a graduate of St. Thomas More High School in Lafayette, said, “When I found about the shooting I was at school. I had to worry about what happened to my friends and my family. It was so close to home. Whenever I found out two girls passed away I wanted to do something to help.”
May continued, “I would like to have something good to come out of it. Something in her memory. It was so nice we could do something.”
Carleen Boudreaux, radiologic technology program director at Delgado, said the fundraising for the scholarship would be ongoing.
Boudreaux also said the meeting of the Louisiana Society of Radiolgoic Tehnologists in Lafayette before the shooting made the shooting hit closer to home.
“The students realized they were just with this group of students at the meeting,” Boudreaux said. “Even though they didn’t know Mayci personally, they knew they had made a connection with the students from LSUE.”