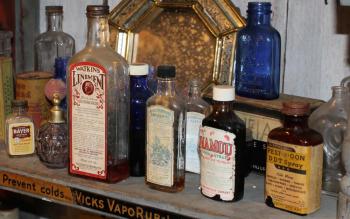 An assortment of medicines, including Mamou Cough Syrup, sits on the shelves inside the Adam Ponthieu Grocery Store and Big Bend Post Office Museum. (Gazette photo by Raymond Partsch III) 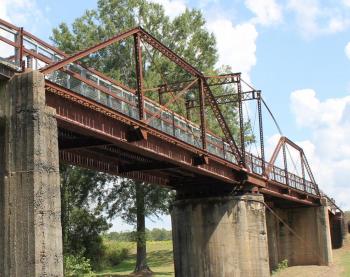 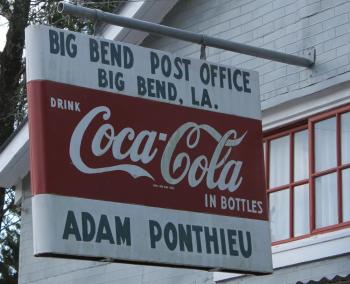 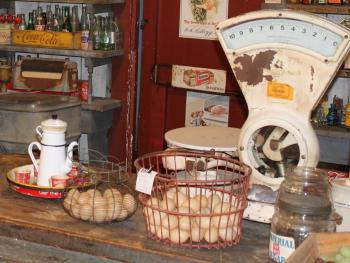 BIG BEND -- Jimmy Bernard is a passionate storyteller.
The 62-year-old has always loved sitting down and listening to people tell tall tales, whether that was at the country general store or at the Louisiana State Penitentiary at Angola, where Bernard worked at for 24 years.
“I am just a people person,” Bernard said. “I am used to sitting down and talking with people. Whether it is an inmate or tourists, I just love sharing stories.”
That makes Bernard the ideal tour guide for the Adam Ponthieu Grocery Store and Big Bend Post Office Museum, located on La. Highway 451 about eight miles outside of Bordelonville.
The museum is one of the most well-perserved and fascinating time capsules of what everyday life was for those who lived in rural Avoyelles Parish, where cotton and moss gins were prevalent, during the early 20th century.
The white A-frame grocery store, with a faded Coca-Cola sign that swings from above the front porch, is filled to the brim with items from 1900-1950s. There is a 1937 gas-powered Maytag washing machine, a corn sheller and grinder, old drip coffee pots, cheese cutter, dutch oven, salt meat pots, cigarette roller, rag dolls, an old Coca-Cola machine, shelves of old medicine (including something called Mamou Cough Syrup) and there is even an old wooden ballot box on the counter.
The Post Office still has its old business ledgers as well as an old telephone, a device that stamps checks device and several yellowed and worn posted items and money orders.
The washing machine is an obvious talking point for visitors but so are the bird and squirrel traps, which Bernard proudly demonstrates to visitors.
“One of things that amazes people the most is that bird trap,” Bernard said. “You wouldn’t believe how many people have not seen one like that. You never know who is going to ask what question. You have to be prepared.”
The store’s old stock room is being utilized as a museum of the area’s rich history, with items on the 1927 Great Flood, LR&N Railroad, numerous community figures and the Rexmere and Kleinwood Plantations.
There is probably no one better prepared to answer those questions than Bernard, a devoted local historian and walking encyclopedia of Big Bend knowledge.
Bernard grew up across the bayou about a fourth of a mile down the road from the store. He would spend countless hours in the store as a child, and later as a teenager that location would be where he went to buy gas for his lawn mower, so he could make a few extra dollars.
The store and post office were without a doubt the focal point of the community, both socially and economically.
“This was the hub of the community,” Bernard said. “When you walk in here and look at the counter you will see that it is worn. Well that’s from people picking up themselves and sitting on the counter. There were solving the world’s problems back then.”
Bernard added, “I just wish I could have recorded in some sort of way or listen closer to those conversations. That’s something you can’t bring back.”
The general store was established in 1900 by Thomas Hall Carruth. In the early 1920’s his son-in-law, Byron F. Lemoine Sr., took over operation and himself was later named the postmaster for Big Bend, a position he held for 27 years.
The Great Flood of 1927 destroyed the building but Lemoine rebuilt the store and post office on the site.
Adam Ponthieu Sr. then purchased the store in 1946 and moved it a few hundred yards to its present location. Ponthier became postmaster in 1947 and held the position until the location closed on April 30, 1994.
His son Adam Ponthieu Jr. donated the store, post office and property to the La Commission des Avoyelles who restored it and reopened it as a museum in 2001.
Bernard has been involved with the museum, and the Sarto Old Iron Bridge across the road, for 18 years. Even though he grew up in the area, Bernard still felt he needed to educate himself even more on the store and area.
“I did interviews with a bunch of old-timers,” Bernard said. “I sat down and wrote a bunch of questions like what was it like when electricity came through the area, who owned the first TV and different things like that. I did that because I felt it was important to know all of this.”
The store and post office aren’t the only places to experience. The Sarto Old Iron Bridge is directly across from Adam Ponthieu on the Bayou des Glaises. The old swing truss bridge was completed in 1916, was shut down in 1988 due to being deemed unsafe, has since been restored and was the first bridge in state to be placed on the National Register of Historic Places.
As for Bernard, he will continue to tell the stories of the Big Bend landmarks until his dream of seeing them on the silver screen or small screen are complete.
Even then Bernard will likely still be giving visitors a memorable tour of how Avoyelles residents lived a century ago.
“Every time it slows down around here I try to kick it in the ribs and make it get back up,” Bernard laughed. “My ultimate goal is to get a movie or TV show filmed here or at the bridge. Until that happens I am not going to quit.”