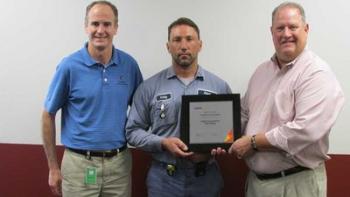 The Cabot plant in Ville Platte recently set an industry standard as the first carbon black plant in North America to receive the Cabot President’s Award for three years without a recordable accident.

The event was significant enough for Cabot executives from the corporate headquarters in Boston, Massachusetts, to visit Ville Platte for a recognition ceremony that included presentation of the award, signed by Cabot President and CEO Patrick Prevost, to plant employees.

Kurt Ackermann, Cabot maintenance manager, said plant employees “are proud of this record.” Ackermann, who has been at the plant for three years, is a nationally certified safety professional, which requires periodic education and testing to maintain that certification.

Mark Suellentrop, plant general manager, began the award presentation. He and two executives who came to Ville Platte for the event, Jake Homiller, vice president, and Carl Long, regional general manager, talked about the importance of keeping a focus on safety.

Homiller asked if any of the employees at the ceremony wanted to comment on reaching the milestone of three years without an injury.

Two employees stressed the “cultural change” that has set a standard at the Ville Platte facility. Homiller agreed with an employee’s observation that the cultural change the employees were aware of is difficult to describe. Another employee said part of the culture involved “watching out for other people” around them, and that employees “are free to talk” about any concerns they have.

At the end of the ceremony, Homiller read a letter from Prevost, the Cabot president and CEO, congratulating the employees. Suellentrop said Prevost was unable to attend the award ceremony but would visit the plant soon.