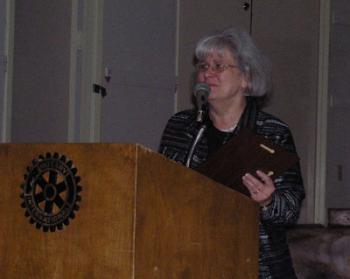 The Ville Platte Rotary Club inducted its new slate of officers for the coming club year and honored its own at the annual Installation Banquet held Tuesday, June 10, at the Northside Civic Center.

Outgoing president Eric Gil opened the program with his thoughts and comments on his year as president. He thanked the board members for their help and said he learned a great deal from them. He said he now has a much deeper loyalty for the organization after serving as president. He added he learned the true impact of what the club has done for Ville Platte with its literacy efforts and countless scholarships to area students. He also said the library did a great job helping with the club’s literacy project this year, noting many books were donated to the library in the name of the Ville Platte Rotary Club.

Assistant District Governor Larry Lachney then introduced the evening’s guest speaker, District Governor Mike Collins, who spoke about the Rotary Foundation and all of the community service work the organization performs around the world. He admitted he was a Lion’s club member, and although similar, he became intrigued with the work the Rotary Club was doing and added he had never found an unfriendly club. He went on to commend District 6200, noting the first group study exchange was done in New Zealand with a club from this district.

Collins said the Rotary Foundation is near and dear to how all of the clubs work and allows clubs to partner together for special projects. He stated he is planning a big event in Houma around Halloween and time of the district conference, where he hopes to get Governor Bobby Jindal to be the guest speaker.

In closing, Collins said this year’s Rotary motto is “Make dreams real.” He noted literacy and clean drinking water and ending hunger remain top Rotary projects, and he said the clubs can grow stronger by sponsoring new clubs and bringing more community and business leaders into the Rotary organization.

Rotarian Leonard Fontenot received a special pin for being a six-time Paul Harris fellow. He was then able to name two people as honorary Paul Harris fellows. Fontenot presented the honor to Ray Duplechain and the family of the late Clifton LaHaye.

Newly-elected president Bob Manuel presented Collins with a special gift of thanks for serving as guest speaker for the evening, as well as a thank you gift to Gil for a job well done serving as president for the past year.

Manuel told his fellow club members he was looking forward to serving as president and he has many unique and different ideas to try to help get more members involved in projects and activities, especially newer members. He said he believed in the four-way test and proclaimed it is not just for the club, but it is something people can use as a way of life.

Before the program closed, the Rotarian of the Year was announced by Gil. This year, the special honor went to a very surprised Mary Foster-Galasso. Gil noted Galasso has a great passion for her job as director of the Evangeline Parish Library and shows limitless kindness to others. He said her involvement with the Rotary’s literacy project this year and her efforts to help the library receive many donated books did not go unnoticed. A humble Galasso thanked her fellow club members for selecting her, but she said she thought others deserved the honor more than she did. She thanked the club for its support of the library and literacy programs. She also thanked her husband, Gary, for standing by her and supporting her library and Rotary efforts.

Following the conclusion of the meeting, club members enjoyed a wonderful meal and an evening of fellowship.