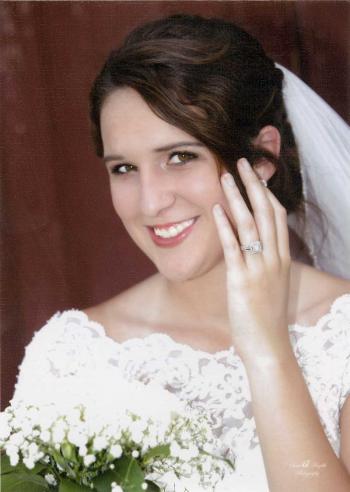 Our Lady of Mt. Carmel Catholic Church in Chataignier provided the setting for a lovely 6 p.m. ceremony Friday, July 24, 2015, uniting Miss Courtney Annette Cloud and Mr. Tyla Wayne Godeaux in holy matrimony, with Father Darren Elridge officiating.
The bride is the daughter of Mike and Kim Cloud of Ville Platte. The groom is the son of Ray Allen and Kay Godeaux of Point Blue.
Given in marriage by her father, the bride was radiant in her floral patterned gown of Alencon lace on top of a romantic sweetheart neckline and plunging v-neck. The empire waistline was accented with exquisite crystal beading.The gown was accented with feminine cap sleeves and covered buttons.
The bride carried a beautiful nosegay of two dozen cream-colored roses and gypsophilia wrapped in ivory-colored satin ribbon along with a piece of her late grandmother Annette Poret’s wedding dress.
Hanna Dunagan of Ville Platte, sister-in-law of the bride, served as matron of honor for the special occasion.
Bridesmaids were Heather Fontenot, Hannah Fontenot and Allie Soileau, all of Ville Platte, Taylor Perry of Whiteville, Nayomi Vidrine of Point Blue and Heather Johnson of Grand Prairie.
Adam Fontenot of L’anse Aux Pailles served as best man for the evening ceremony.
Groomsmen were Matt Chaisson of Ville Platte and Willard Fontenot of Jennings, brothers of the groom, Josh Fontenot, Jeff Lafleur and Cody Savoie all of Ville Platte, and Colby Fontenot of Jennings, nephew of the groom.
Carley Cloud, sister of the bride, served as junior bridesmaid; and Colby Cloud, brother of the bride, served as junior groomsman.
Ava Fontenot, niece of the groom, served as flower girl; and Abel McGee, cousin of the groom, served as ring bearer.
Ushers were Casey Dunagan, brother of the bride; and Eric Fontenot, uncle of the bride, both of Ville Platte.
A reception followed at the Northside Civic Center.
Following a wedding trip to Gatlinburg, Tennessee, the couple has made their home in Lake Charles.