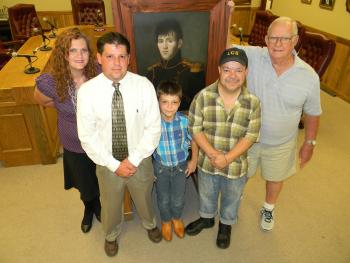 Gene Buller has an avoir la passion de, or passion, when it comes to his French-Louisiana heritage.
The 78-year-old Ville Platte man, and avid outdoorsman, enjoys speaking the language of the people who helped settled the land he has spent his life referring to as home. Buller thoroughly delights in taking part in a spirited discussion regarding the state’s rich and storied French-related history, whether that is concerning art, government, military conflicts, music and of course world renowned cuisine.
All of which makes Buller as Louisiana as they get, but that doesn’t mean he identifies with what some residents, in-state and out of state, claim as their own identity, being Cajun.
“I had a person come up to me once and asked ‘where did you learn to speak Cajun French?’ Buller recalled. “I said, Excuse me but I don’t speak Cajun French. I speak French. There is nothing Cajun French about me.”
Buller proudly makes that distinction because he is of Creole heritage and has joined with others in Evangeline Parish to help educate people about that history, some of which has been forgotten over generations.
The Creole Families Cultural Education Society, which Buller serves as president, aims to help educate people about that history. The group will have an opportunity to do just that this Sunday when it will be hosting the fifth annual Louisiana Country Creole Families Bastille Day Heritage Festival.
The event will run from 10 a.m. to 4 p.m. at the Ville Platte Civic Center Pavilion and feature music by Horace Trahan and the Ossun Express.
“The point is to educate, and to inform and celebrate all the ethnicities that helped create this Louisiana-born culture,” chairman and festival organizer John LaFleur II said.
Like Buller, LaFleur shares a deep passion for the topic of Louisiana culture.
After studying French and Art at Louisiana State University, the 57-year-old scholar has spent his adult life immersed in the history of Louisiana and Creoles. He is a professional artist who also has taught French in schools throughout the state, including Evangeline Parish, and has written several books on the state’s French history and even a co-authored a cookbook.
For LaFleur, frustration stems from what is being, and has been, proclaimed as Cajun history, is in fact French-Creole. LaFleur points to recipe books from the first decade of the 20th century which have Creole dishes that are identical to dishes now commonly referred to as Cajun.
“The whole culture called Cajun has absolutely pre-Acadian, Candian-French and African roots,” LaFleur said.
Both LaFleur and Buller point to the fact that the French settled in Louisiana, many of them in what we now call Evangeline, St. Landry, Avoyelles and Point Coupee Parishes several decades prior to the arrival of the Acadianas in 1784, who settled far south of this area. In particular Donladsonville and other areas along the coastal parishes.
“Fontenots, Deshotels, Guillorys all settled here in this area and they were all Frenchmen,” Buller said. “None of them were Acadianas. The people from this area are of French descendent. It is history. You can’t deny it.”
Many of Louisiana families are Creole, as many settlers from France or Germany and other European countries had children with other European-born settlers or with Native Americans or African-Americans.
LaFleur notes that Creole didn’t take on a negative continuation until the “One Drop Rule” movement of the late 19th century was put into law in multiple states, including Louisiana in 1910.
The rule that if anyone had one drop of “black blood” would be considered black, or at that time a “Negro.”
“That really provided a catalyst for separating previously united families of color from their white relatives,” LaFleur said. “Many of the white Creoles feared that they were next in line. Creole begins to become a negative stereotype,”
According to LaFleur and Buller, what has buried Creole culture more than anything in the past fifty years though is the “Cajunization” of Louisiana culture and the “mythical history” of Cajun culture. In particular, Sen. Dudley LeBlanc who LaFleur and Buller claim spearheaded the movement to help develop tourism in the state, which has continued on to this day with food products and reality TV shows.
“They started the big Cajun myth that anybody who is white and spoke French was a Cajun.,” Buller said. “They told a fairy tale and people bought it. People here like my mother told me that I was not an Acadiana. I knew that but not everyone was taught that.”
“It is so easy to believe the lie when people are cashing in on it,” LaFleur said. “We prefer history over the myth.”
But both men agree that people are slowly becoming more knowledgeable of the Creole culture, and proof of that is John Soileau.
The 40-year-old Ville Platte native and Pine Prairie High graduate began to embrace his Creole heritage around six years ago, eventually being able to trace his family to some of the earliest settlers in the state.
Now Soileau is helping in spreading the knowledge of his culture as he serves as Vice Chairman for the festival.
“Our culture is unique,” Soileau said. “It celebrates family life, religion, happiness, and Earth. If you don’t know where you came from then you don’t know who you are. If you don’t know where you came from you lose what is unique about your culture.”
Part of that process for Soileau has been taking time to educate people about what he calls “the uniqueness and richness” of our culture. That includes passing down those lessons down to the younger generation of Creoles, like his 9-year-old son Isaiah.
“It is extremely important to me,” Soileau said. “It is gratifying bonding time between the two of us. Even though it may not be as exciting as the next hot item on the store shelves it will make a difference. It is what kids appreciate more down the road. It will be what they grow to respect.”