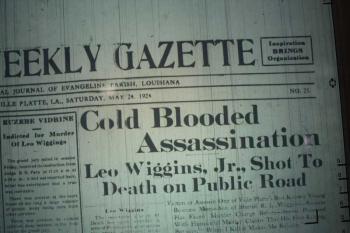 The case produced headlines from this one, right after the murder, to the hanging of the murderer 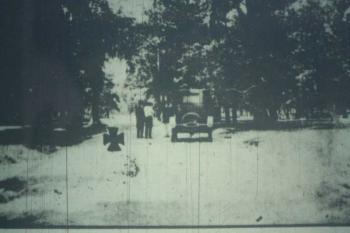 This photo shows where Wiggins’ car was when Vidrine, standing where the “X” is, shot him. The caption described the place where the murder occurred “happens to be one of the beauty spots on the public highway between Mamou and Ville Platte.” 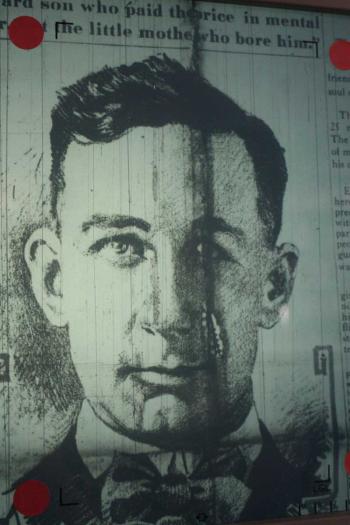 Euzebe Vidrine was convicted and hung for murder 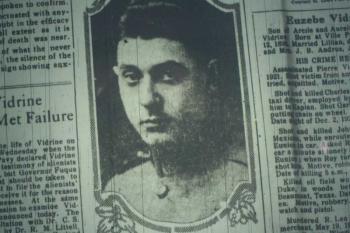 Leo Wiggins was the murder victim

The Weekly Gazette was 10 years old when it covered the most sensational murder case in the parish. The victim, Robert Leo Wiggins, was the son of former Sheriff R.L. Wiggins.
It was 90 years ago, in 1924, when the newspaper published the story about the murder on May 24. Wiggins was shot while he was driving on the Ville Platte-Mamou highway.
The article described Wiggins’ funeral as “the largest ever held in this parish.” There were more than 200 cars parked at Sacred Heart for the funeral, and more than 1,200 people followed the casket from the church to the cemetery.
Euzebe Vidrine, who had faced murder charges before, was arrested and confessed to the murder. An article in the May 31 edition of The Weekly Gazette described the start of the murder trial. It described Vidrine as “the cold blooded assassin.” The article stated he “trembled visibly” as he entered the courtroom, and speculated that “sleepless nights, torture of mind, fear of the rope left him a semi-cringing human wreck.”
The defendant looked at his two brothers in the courtroom but the article stated he never looked at Wiggins’ relatives.
He said in court that he had left school in the fourth grade and that he drank all night before he shot Wiggins.
The June 7 issue of The Weekly Gazette reported that Vidrine was sentenced to death and that he wanted to be “hanged immediately.” However, according to law, the governor had the responsibility of setting the execution date.
Vidrine’s attorneys had tried to have him declared insane and therefore not eligible for the death penalty. When that failed shortly before the execution day, Vidrine is quoted in The Weekly Gazette as saying, “I guess that ends it. The jig’s up.”
The story ended, again with large crowds and large headlines. The headline, in the August 9, 1924, edition of The Weekly Gazette -- which stretched across the entire length of the front top page, in all capital letters: EUZEBE VIDRINE PAYS PRICE FOR MURDER.
The article stated it was the first “legal hanging” in the parish. Sheriff Charles H. Pucheu and some deputies brought Vidrine from his cell to a stockade next to the jail house a few minutes after noon. By then, thousands of bystanders were outside on the courthouse grounds. The newspaper reported “the crowds were remarkably orderly
Vidrine delivered a rambling 25-minute talk to the witnesses in the stockade, while the sheriff stood by with a hatched that he would use to cut a rope restraining the trap door the condemned prisoner was standing on.
When he finished talking, Vidrine said to the sheriff, “Cut it Charley and be my friend.” At 12:45 p.m., “the trap door opened and the soul of Euzebe Vidrine was swept into eternity,” the article reported. Vidrine was pronounced dead at 1:21 p.m.
Vidrine’s body was placed in an open coffin in the jail house. For the rest of the afternoon, the thousands of people who had been outside on the courthouse grounds viewed the body in the open coffin.