Nestled on a hill 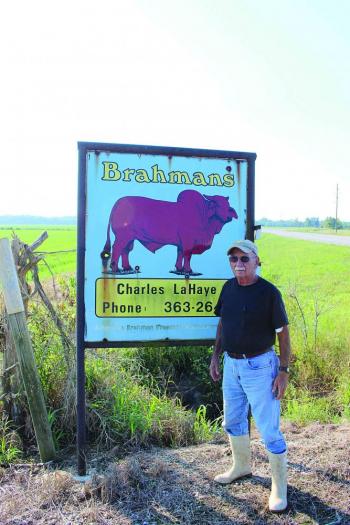 Charles LaHaye is pictured here as he stands against a sign for his Brahmans cows that rests on the edge of U. S. Highway 167 south of Bayou Chicot. Off the highway is a half-mile long road that leads to LaHaye’s house and farm that are on the highest point of Evangeline Parish. (Gazette photo by Tony Marks)

Nestled along Bayou Chicot is the highest point in Evangeline Parish that measures 37 feet above sea level. Radiating from this point are 1,200 acres of farmland. One hundred fifty of those acres belong to Charles and Wendy LaHaye, who have been living on the highest point of the property since 1962. The remainder of the property belongs to Charles’ brothers Kenneth and Johnny.
“Wendy and I graduated in 1961,” Charles said. “We lived one year in Vidrine at my grandmother’s house while this house was being built. Once this house was built, we moved into this house, and we’ve never moved.”
“There weren’t a lot of homes when we first moved out here,” said Wendy. “It was very remote, but I didn’t mind being out here. Charles had graduated from McNeese, and we moved back over here because he had to farm.”
Charles explained that it took 10 days to build the house and a barn, and it took three carpenters. One of the carpenters was Blanc Mayeux. He said “All of the houses in Vidrine including Uncle Elvin’s, Uncle Aubrey’s, and Uncle Will’s were all built by Mr. Blanc Mayeux’s people.”
He also explained about withstanding the first hurricane in the new house. “The first person who came sleep in this house besides Wendy and I was Ervin Chapman who worked for us,” Charles said. “He lived down the road, and his wife and son were afraid of the hurricane.”
“We have this big picture window in the house,” continued Charles. “Ervin said we’re going to take the cattle trailer, and we’re going to put it in front of the window. If the wind blew something, it would not have hit the window because it was going to hit the cattle trailer. It was a good idea because we never been through a hurricane before. We didn’t know anything about hurricanes at that time.”
One barn behind the house predates the house itself. “The barn was built by my dad J. B. LaHaye,” Charles said. “All of it would be full with hay, and we’d feed cows under it.”
Cattle has always been raised on his part of the farm. Charles said, “At this part of the farm up on the hills, you can’t do anything with it because it’s going to erode if you plow it. You have to leave it as grass. Everything else is crops down below. This part is all cattle because it’s all steep hills.”
Charles, at age 75, has been raising Brahmans cows on the farm since 1976 and explained that he is fazing out the breed. “I’m taking Brahmans bulls off, and I’m breeding everything with Herefords,” he said. “Brahmans cattle are hard. When those mommas have kind of big teats, the babies don’t know how to nurse. You have to make them nurse, and I’m getting too old to bend down under that chute. The Hereford calves get up, and they nurse.”
Located in the barn is Charles’ cattle room. Inside are saddles that belonged to his grandfather and his father as well as ones that belonged to his son Chuck and daughter Lisa. Hanging on the walls are all of Charles’ bridles and branding equipment.
A short ride away from the barn rests a camp that was Charles’ grandfather’s outdoor kitchen. “All of these tools hanging on the wall came from Wendy’s momma’s house in Bell City,” Charles said. “They’re probably older than some of the tools that we have over here.”
“When dad bought the place, he moved the camp over here,” Charles continued. “We don’t use it much anymore. We’ve had parties before over here for Easter or something when the whole family would come, and the kids would ride the bikes. Other than that we usually come for Squirrel Season or for something like that.”
The camp is located on the edge of an eight to 12 acre lake that provided Christmas presents to Wendy. “Our son Chris would sit down right here and take pictures of the deer coming to drink on the edge of the lake,” Charles said. “There’s some pictures on the wall at home that he made for his mom for Christmas with pictures of ducks and other animals that he saw out here.”
On the opposite side of the lake is the pasture where Charles keeps most of his Brahmans cattle. Bayou Chicot begins behind some trees located at that part of the farm and runs along the edge of most of the pasture.
Charles has tried his hand at raising something else besides cattle. “I tried for 15 years to plant crawfish here, but I never could,” he said. “I don’t know why. They make crawfish south of here towards Vidrine and Mamou, but in Chicot there’s no crawfish.”
While Charles LaHaye may not have been able to produce crawfish, he and his wife Wendy have produced a lifetime of memories while living up on the hill off of U. S. Highway 167. They look forward to continuing to live on the farm and to passing on these memories to their four grandchildren.