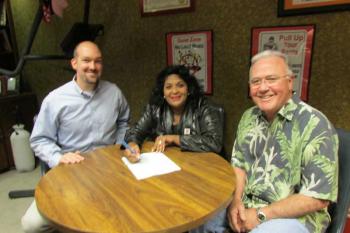 Ville Platte’s consulting engineer Ronnie Landreneau, right, and attorney, Greg Vidrine, left, advise Mayor Jennifer Vidrine, as she signs a contract providing new water meters for city residents.
New water meters will be replacing old meters to about 3,200 residential and commercial customers during the next week or two, but Mayor Jennifer Vidrine said the project will cause no interruption in water service.
The meters will be read automatically at city hall, and the readings are expected to be more accurate. Mayor Vidrine said the city will be able to detect leaks in the water system more quickly with the new system. “Our clients will be able to avoid huge water bills,” by quick detection of leaks, she added. When the automated metering system is operational, the city’s water system customers could be provided with printed reports of their water usage.
Data from the meters throughout the city will be collected automatically from antennas on the city’s eastern and western water towers, both off Highway 167. The data will be processed through hardware enclosed in storm-protected shelters at the base of the water towers, and relayed to hardware in city hall.
The mayor signed a $1.5 million contract for the metering system on Friday, September 27, in her office. It’s the first in the parish and one of “a hand full,” in the state, consulting engineer Ronnie Landreneau said.
The automated metering system is part of an overall $13.5 million project to improve the city’s water system that includes installing new water lines and hydrants.