Trojans bully up on Mamou Demons 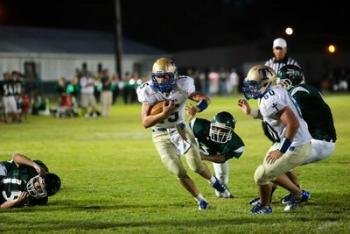 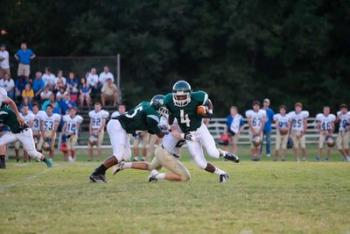 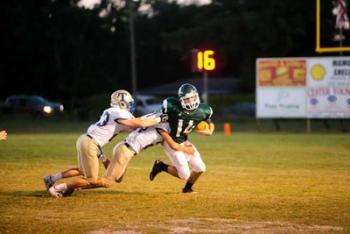 When Sacred Heart and Mamou collided Thursday night, there was a lot on the line for the teams as far as the year is concerned. There was also a lot of emotions involved. Both of the teams needed to win to regain momentum and composure. Mamou was coming off of a very disappointing loss to Pine Prairie, while the Trojans had not won a game yet and had scored just one time in eight quarters. The two coaches involved, Doug Guillory (SHHS) and Kevin Manuel (Mamou), were long-time friends and co-workers. All of those emotions would be tested as the 48-minute contest would play out. The Trojans set the tempo early on special teams when they tried a fake a punt at mid-field and it went sour. Special teams also played a role when Mamou went three and out on their first possession. On the punt, the kick was shanked and that gave the Trojans the ball at mid-field. Sacred Heart got a big burst when senior quarterback Wesley Fontenot bolted for 25 yards. Moments later, Fontenot hit Ellis Parrott on a 24-yard strike into the end zone for a touchdown. Drake Doucet’s kick was good, making it a 7-0 contest. Sacred Heart, who has struggled on special teams, decided to squib kick the ball rather than attempt to kick it downfield due to Mamou’s speed. The kick acted more like an onsides kick and Sacred Heart recovered the football. The Trojans were not able to do anything with the ball on that possession, but it would not be long until they would get back in the end zone. After Mamou was forced to punt, Ellis Parrott gave the Trojans great field position with a great punt return. After a 17-yard run by Parrott, Grant Manuel finished off the drive with a two-yard run for six points. Doucet hit the extra point, making it a 14-0 contest. In the second frame, the Trojans continued to dominate the game. On their first possession of the second half, they made it evident they were there to win the game. Fontenot bolted for a 16-yard run and got the ball into Mamou territory. The Demons’ defense was weary as SHHS marched into the red zone. Manuel capped the drive with his second touchdown of the night. He hauled it in from the four-yard line. The extra point kick was not good, but the Trojans were in good shape, leading 20-0. Sacred Heart didn’t have to wait long until they would have the football back again. The Trojans, who had made some very positive changes on offense coming into the contest, moved the ball to mid-field. It was here where they went with a rare screen play that caught the Demons completely off guard. Fontenot hit Mikey Laughlin on a screen pass and the speedster did it all from there. He galloped 50 yards for the fourth SHHS score of the night. Sacred Heart’s good fortune continued as the game marched towards the midway point. Mamou coughed up the football and the Trojans were quick to scoop it up. Ellis Parrot made the most of the first play from scrimmage. He took a handoff and blasted for a big run. He got the Trojans into Mamou territory and quickly into scoring position. At that point, the Trojans went to the trick play bag and called an old fashioned hook and lateral play. Laughlin made the most of that play and picked up another six points. Drake Doucet added the extra point, making it 33-0 right before the half.The ensuing kickoff stirred up some emotions on both sides of the field. The Trojans continued with their strategy of not kicking the ball deep. They elected to squib kick the ball again. The kick went short, which mimicked an “onsides” kick and Sacred Heart recovered. Mamou fans and coaches viewed it as SHHS trying to run up the score and that got emotions running high. Two plays later, Wesley Fontenot drove the nail in the coffin with a 24-yard isolation play up the middle.Sacred Heart went on to play their younger players for most of the second half. However, emotions continued on both sides of the ball. Several late hits and personal foul flags began to fly. This soured the game a bit as the clock expired. When all the dust settled, the Trojans marched out of Mamou with a 40-0 win. The Trojans will head to Pine Prairie Thursday night. Pine Prairie (2-2) played a very tough Vinton team Friday night and came up short, 28-6. Mamou hosts Montgomery for homecoming Thursday night. Montgomery is 3-1 on the season with an impressive 48-20 win over Red River High School Friday night.