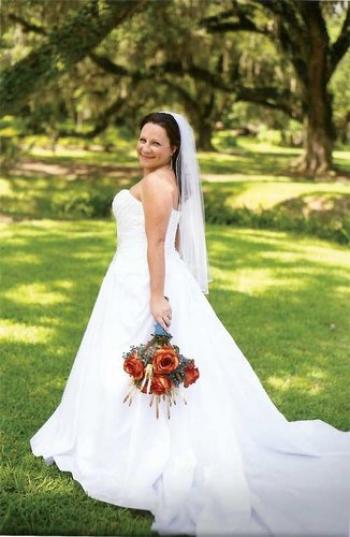 The bride is the daughter of Mr. and Mrs. Alvin F. Fitch of Breaux Bridge. The groom is the son of Diana and Warren Pierrotti of Mamou and Joseph Sr. and Sylvia Soileau of Ville Platte.

The hall was beautifully decorated with white satin accented with serene blue and coral colors and the ceremony took place under a romantic gazebo.

Given in marriage by her father, the bride was radiant in her DaVinci white satin A-line gown accented with a sweetheart neckline and corset top. Beading draped from the waist down for a gathered, beaded appearance on the left side. The gown flowed into a long princess train. She wore a cascading fingertip-length veil accented with beads and chandelier earrings to complete her attire.

Margaret Davis of Lafayette served her friend as matron of honor for the special occasion. She wore a serene blue, sleeveless, v-neckline gown of satin featuring a slim skirt. She wore silver jewelry and shoes and carried a long-stemmed burnt orange rose accented with wheat mini cattails.

Chance Soileau of Mamou, son of the groom, served as best man for the evening ceremony.

For her daughter’s special day, the bride’s mother selected a champagne-colored dress with matching embroidered jacket.

Following a wedding trip to Gulf Shores, Alabama, the couple has made their home in Mamou.