Those “pretty yellow flowers,” not really! 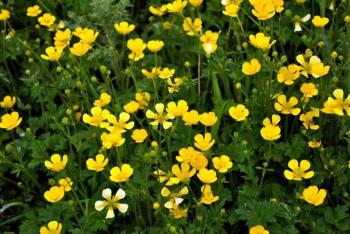 BUTTERCUPS - In the first photo, a close up of Buttercup showing the shiny, glossy flowers and the leaf and stem growth that can eventually shade out the pasture or hayfield forage. The second photo is an image of the “pretty yellow flowers” across the field.

We are fast approaching the time of year when many roadsides, pastures, hay fields, and even lawns, will begin to show those “pretty yellow flower” plants everywhere. However you won’t catch any cattleman, hay producer, or homeowner calling them pretty. Usually they have other quite colorful language used to describe the prolific, Buttercup.
Buttercups belong to the “ranunculus” genus which contains about 600 different species of plants, that are mostly herbaceous perennials, while some are annuals and biennials. In our area the more common species have yellow flowers, but some plants in this group may have white, orange, or red flowers. The yellow petals are very lustrous and shiny, and usually seen in the spring into summer. However, as is the case with many “normal” things, we often see flowers during warm periods in the fall and winter as well.
Usually Buttercups germinate and begin growth in the early fall, and go pretty much unnoticed until those yellow flowers begin to pop out usually in February and early March. Then as it warms up they grow quickly in the early spring, then die out as we convert to the warmer temperatures in Mid May to June. During this growth period, they are competitive and consume fertilizer and water that our forage and hay producing plants, as well as lawns, so severely need. They are also developing seed to drop for next years’ crop to begin the cycle again, in the Fall.
Another factor about buttercup, that many people don’t know is, they are a toxic plant and can be poisonous if eaten by livestock. Poisoning can occur where buttercups are abundant in overgrazed fields where there is little other edible plant material, and animals eat them out of desperation. Symptoms include bloody diarrhea, excessive salivation, colic, and severe blistering of the mucous membranes. However, due to their leaves and stems having a very acrid taste and causing blistering of the mouth of animals that attempt to eat it, they are usually left uneaten. This presents another problem, as the plants get very large and tall due to the fertilizer and water they have taken, they also begin to shade out the desirable grasses being grown for pasture and hay. Then when they do die from the heat they drop seed, and also leave an opening in the pasture for other warm season weeds to take their place.
Factors to consider to control buttercup include:
1. Have good fertilization to promote vigorous growth and thick stands of fall & spring forages;
2. Keep pH levels of the pastures in the range of 5.7 to 6.5 for forage growth by liming;
3. Do not overgraze fall forages which allow excessive buttercup emergence and growth,
4. Mowing or clipping pastures in the spring will reduce the amount of new seed produced for next seasons’ crop.
Chemical Control with Herbicides is another very effective method to control buttercups. As mentioned earlier, growth begins in the fall, so on warmer days (55-65 degrees) in the months of December through February applications on the young very small hard to see weeds are effective. This is when buttercups are easiest to control, and have not yet stolen your fertilizer and water, that should go to your forage crop. If Clover is present in the field, an early herbicide application is also less damaging to clover, as compared to a late season application. However many folks wait until they can see the flowers, which a late application will clean up the field and stop seed production for next year.
For chemical control, herbicides registered for use on grass pastures that contain 2,4-D will effectively and economically control buttercup. Depending on other weeds present, other products that contain dicamba (clarity, banvel) dicamba + 2,4-D (weedmaster), aminopyralids (forefront, milestone, GrazonNext, etc.) triclopyr (pastureguard, crossbow, remedy) or metsulfuron (Cimarron Max) Picloram + 2,4-D (Grazon P+D),can also be used. These are just a few of many different choices, along with several other generic compounds of the same materials.
One consideration for pastures with clovers or other legumes, is to check the herbicide labels as to their compatibility with clovers, that could be severely injured or killed. Early season applications, with compatible products, usually damage clovers less severely. Always consult herbicide labels for their compatibility and use rates in all cases.
For lawn buttercup control, the two 4-D compounds are equally effective, as well as many of the pre-mixed concentrates available such as:
Weed B Gone, Ferti Lome Weed Free Zone, Bayer Advanced Southern Weed Killer, Trimec, and Spectracide Weedstop Also, always check product labels for mixing and application rates, as well as compatibility of the product with different lawn grasses.