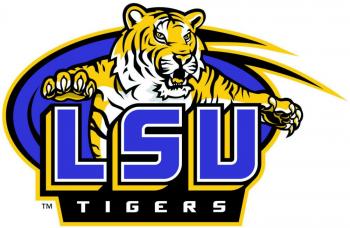 BATON ROUGE – LSU sophomore running back Leonard Fournette and senior right tackle Vadal Alexander led a group of five Tigers who were selected to the Southeastern Conference Coaches’ All-SEC Teams, the conference office announced Tuesday.
Fournette and Alexander earned spots on the All-SEC First Team with Fournette being honored at running back and Alexander on the offensive line.
Junior center Ethan Pocic, junior cornerback Tre’Davious White and sophomore safety Jamal Adams were all voted to the All-SEC Second Team.
Fournette leads the nation in rushing by averaging 158.3 yards per game, and he currently has an LSU single-season record 1,741 rushing yards along with 18 rushing touchdowns heading into the bowl game.
Alexander, a four-year starter on the offensive line, has played more than 700 offensive snaps this season and posted more than 100 knockdown blocks while starting all 11 games (10 at right tackle and one at left tackle).
Pocic started all 11 games at center, helping lead the way for LSU’s outstanding rushing attack that ranks No. 1 in the SEC at 245.9 yards per game and has a league-best 29 rushing touchdowns. Pocic is the team leader in knockdown blocks, recording more than 115 for the Tigers.
White started 10 games at cornerback and tallied 38 tackles, one tackle for a loss and a team-leading six pass breakups. His PBU late in the season opener at Mississippi State helped preserve the Tigers’ 21-19 victory over the Bulldogs.
Adams is in his first season as a starter at strong safety where he ranks third on the team with 60 tackles and leads the squad with four interceptions. He also posted five pass breakups, 5.0 tackles for a loss, one fumble recovery and one forced fumble for an LSU defense that ranks fifth in the SEC in total defense at 342.5 yards per game.
LSU’s five All-SEC selections rank fourth in the league, behind Alabama’s 10 and Ole Miss’ and Texas A&M’s seven honors. Florida also earned five spots on the All-SEC First and Second Teams.
No. 20 LSU (8-3) will close out the 2015 season by making its first appearance in the 10th annual AdvoCare V100 Texas Bowl against Texas Tech (7-5) on Tuesday, Dec. 29.
Kickoff for the Texas Bowl is set for 8 p.m. inside NRG Stadium in Houston, Texas. It will be LSU’s third contest against the Red Raiders and the first since 1957.