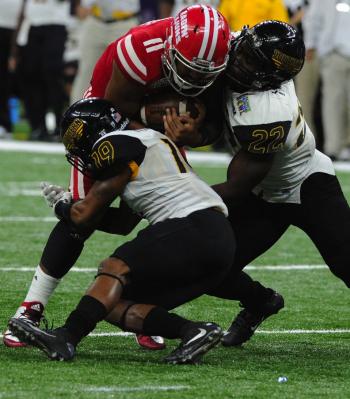 University of Louisiana-Lafayette quarterback Anthony Jennings (11) is wrapped up by Southern Mississippi’s Korey Robinson (18) and Jay’Shawn Washington (22) in the New Orleans Bowl held this past Satruday. The Eagles defeated the Ragin’ Cajuns 28-21. (Photo courtesy of Brad Bowie)

NEW ORLEANS -- The Louisiana-Lafayette football team can longer claim to be perfect inside the Mercedes-Benz Superdome.
Louisiana-Lafayette could not overcome an early two-touchdown lead and suffered a 28-21 defeat to Southern Mississippi at the New Orleans Bowl late Saturday night, a game that took more than four hours to complete. The Ragin’ Cajuns were a perfect 4-0 in the New Orleans Bowl, played of course in the Superdome, as the team won four straight from 2011-14.
“It was a hard fought football game,” Cajuns coach Mark Hudspeth said. “The first big play, they got on us. The second big play, we had a busted coverage.
“We got down 14-0, but that’s another demonstration of the character of this football game.”
Southern Miss (7-6) jumped out to an early lead with a pair of passing plays.
Following a Louisiana-Lafayette punt to open the game, Southern Miss quarterback Nick Mullens found receiver Allenzae Staggers wide open down the seam for a 55-yard reception. Two plays later, Mullens handed off to Ito Smith for an 11-yard touchdown.
After USM forced another punt, Mullens found Staggers wide open down the seam for a second time, this time for a 66-yard completion. Two plays later, Mullens threw a six-yard touchdown pass to Smith.
“Our guys really fought for 60 (minutes),” Southern Miss coach Jay Hopson said. “(Allenzae Staggers) made some big catches and some big plays early.”
Mullens ended the night with 346 yards and two touchdowns, while Staggers rewrote the New Orleans Bowl record book, as he set new marks for receptions (11) and yards (230).
Staggers was named game MVP, the first wide receiver to do so in the bowl’s 16-year history.
“It is just a blessing,” Staggers said. “We executed the plays. We took our time. We had great precision. I was just open.”
While the Golden Eagles offense was soaring, the defense did its part, led by a record-setting performance from senior defensive lineman Ja’Boree Poole. The 6-foot-2, 250-pound defensive lineman set a New Orleans Bowl record with three sacks, all in the first half, with two of those coming on third down.
“I’m a speed rusher,” Poole said. “I came out hard.”
Cajuns quarterback Anthony Jennings meanwhile was rushed most of the night, completing only 8 of 20 passes for 95 yards while being sacked six times. Jennings also rushed for 19 yards on 20 carries.
“Their pressure tonight got to us,” Hudspeth said. “We did not protect Anthony well enough to get the ball down the field to our wideouts. Nevertheless, our kids played their hearts out.”
Louisiana-Lafayette’s offense finally got on the board late in the first quarter with a nine-play, 66-yard drive capped by a 4-yard touchdown run by Jennings.
The Cajuns defense began to step up as well.
After holding Southern Miss to missed 38-yard field goal attempt by Parker Shaunfield, Louisiana-Lafayette (6-7) senior linebacker Tre’maine Lightfoot also strip-sacked Mullens; while Otha Peters picked up the fumble and returned it 15 yards, which set up a 12-yard touchdown run by Dion Ray.
The Cajuns wrapped up the quarter by forcing another punt and then holding Shaunfield to what appeared to be a 45-yard field goal attempt as time expired. Mullens’ spike with one second left was reviewed, after a shrewd timeout by Hudspeth, and it was ruled that the spike did not occur before time expired.
The Cajuns blew an opportunity to take a lead before the half.
With the ball spotted at the USM 22-yard line and a little more than two minutes to play, Jennings pump-faked and threw it into the corner of the end zone to wide receiver Michael Jacquet, but the pass was under thrown and easily intercepted by Tarvarius Moore.
“We missed some critical opportunities in the red zone,” Hudspeth said. “We had a fourth and short that we didn’t convert.
“We just had too many opportunities offensively where we didn’t score when we need to.”
Southern Miss would set the tone in the second half by opening the third quarter with a 75-yard scoring drive capped by a five-yard touchdown pass from Mullens to Staggers.
The Golden Eagles ate up of clock in the third, wearing out the Cajuns defense, as Louisiana-Lafayette’s offense struggled, recording only 27 yards on 10 plays in the period.
Southern Miss continued with ball control in the fourth quarter as Smith was given plenty of handoffs. Smith ended the game leading all rushers with 138 yards on 26 carries and two touchdowns.
Louisiana-Lafayette though fought back, and a 53-yard interception return by Travis Crawford gave the Cajuns a short field. Jennings capped the 19-yard drive with another touchdown run, this one from three yards out.
With 5:10 left, the Cajuns had closed the gap to 28-21.
The Cajuns defense forced the Golden Eagles to punt and, with 2:02 left, Louisiana-Lafayette had a chance to tie it.
Facing fourth-and-1 at the UL-Lafayette 47-yard line, the Cajuns picked up a first down with a McGuire run, but the drive stalled again. On fourth-and-7 at the USM 48-yard line with 20 seconds left, Jennings rolled out and overthrew Keenan Barnes.
For Cajuns seniors, it was a tough walking off the field losing their final collegiate game.
“It hurts,” Peters said. “At least we had one more game to play. To finish the season with my teammates, family and fans ... I feel great about that, at least.”
“I am kind of emotional right now,” added Elijah McGuire, who had 106 total yards in the loss. “I don’t have much to say. I don’t wan’t to take too many questions.”
After finishing 4-8 in 2015, the Cajuns will now look to build on an up-and-down season that saw them on the brink of not making the postseason, only to win three of their final four games.
“We definitely took a step forward this year,” Hudspeth said. “Last year, we took a step back. We know this was a bit of a rebuilding year, but this year we took a big step forward. We had six freshmen start for us this year. This will probably be the most starters we will have coming back in a long time.”