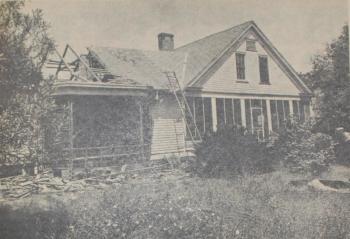 With the disappearance of the old DeRouen home from its location on central Main Street, only one residence now remains in that thoroughfare’s principal business district (from its intersection with Court to its intersection with Chataignier Street). The original portion of this old landmark was built about a decade before the Civil War by Bartholomew Coreil. It was acquired at his succession sale by the DeRouen family and was the late residence of the late congressman Rene L. Derouen and his wife.

September 7, 1961
• Sacred Heart School opened its doors August 31, 1961, with an enrollment of 707 students. The elementary school had totaled 576; the high school had 131. The faculty included two priests, 11 sisters, 12 lay teachers, and two physical education coaches. Hot lunches were served to 685 school children on the first full day of school on Tuesday, September 5, 1961. There were rising costs of cafeteria maintenance that necessitated a rise in the now existing monthly price of $1.50 per student. School hours would be from 8:30 - 3:00 in the elementary school, and from 8:10- 3:15 in the high school division. The high school course of studies included four years of study in the major subjects: Religion, English, Mathematics, and Science. Electives were in social studies and foreign language.
• Twelve hundred students enrolled at Ville Platte school for the 1961-62 school session on opening day said principle Yves Soileau. Five hundred of those were registered in the high school department; the remaining 700 were enrolled in the elementary grades. The lunch program went into effect on the first full day, where hot lunches were provided to students for $1.50 per month. Student insurance was also made available to students at a premium $2.25 per child for the school session.
• One thousand forty-one students was a record enrollment for Mamou schools. Daniel LaHaye, Mamou High School principle, reported that enrollment for the high school stood at 228 students with more expected to enroll after the fall harvest was complete. There were 70 freshmen, 73 sophomores, 43 juniors, and 42 seniors.
•A slender, blue eyed brunette, Margaret Mayeaux, 17-year-old daughter of Mr. and Mrs. Donald Mayeaux, was crowned that Wednesday night as the 1961 “Miss Mamou” and of her own choice was named princess to the Louisiana Yambilee in Opelousas. Miss Mayeaux was chosen over a field of 17 contestants staged Wednesday night in the Mamou High School gymnasium by the American Legion Auxiliary post. The new “Miss Mamou” was crowned by last year’s princess, Lorraine Shuff who in crowning the new queen turned over to her the beautiful robe of royalty. Jean Deville, daughter of Mr. and Mrs. Curtis Deville was chosen first runner-up and was named princess to the Rice Festival in Crowley. Patsy Fontenot, daughter of Mr. and Mrs. Chester Fontenot, was named princess to the Cotton Festival in Ville Platte. Selected as alternate to either of the three princesses was Judy Perrodin daughter of Mr. and Mrs. Nelson Beaurgard. Winners were presented with gifts and behalf of the Legion Auxiliary by Paul C. Tate, local attorney, who officiated as master of ceremonies for the occasion, and sponsors, as they paraded before the judges. Contestants were judged on beauty, poise, and personality. Miss. Mayeaux, a Senior student at the Academy of Sacred Heart at Grand Coteau wore a desert green peau de soie formal styled along princess lines with a full billowing skirt. As “Miss Mamou,” Miss Mayeaux also reigned over all activities of the annual November 11, Veterans Day Celebration here. Both Miss. Deville and Miss. Fontenot wore white ruffled net formals, and Miss Perrodin was attired in a white Satin formal, appliqued with white lace roses. Entertainment during the events program was provided by Peter Savoy, Jimmy Dugas, and Pat Landreneau who perfomed a musical number, and by members of the Peggy McCauley School of Dancing. A vocal selection was also rendering by Misses Rita Fontenot, Wilda Vidrine, and Judy Granger.

September 14, 1961
•Plans for the 1961 Louisiana Cotton Festival scheduled October 13, 14, and 15, moved into high gear this week as committees held planning meetings, and more and more lovely Louisiana girls entered the Cotton Queen Beauty competition. Festival President Elin Pitre appeared before the parish police jury that Tuesday morning and accepted the group’s annual donation of $500 toward defraying festival expenses. The jurors expressed their willingness to contribute to the promotion of cotton in the parish.
•“Echoes,” a floral tribute to the Civil War Centennial Year, was the theme of the flower show that was presented by the Magnolia Garden Club of Ville Platte. The show was held on October 12 and 13, during the Cotton Festival, and was staged at the Ville Platte Primary Building on High School Drive. Club President Mrs. Inez Attaway had announced the following committee chairman for the show: General Chairman Mrs. J.D. LaFleur, staging, Mrs. Harold Stromer, Jr.; Properties, Mrs. Adrian Jeanmard; Entries, Mrs. W.K. Edwards; Placement, Mrs. Henery Welch. Anyone who wished to enter the show could obtain a copy of the schedule at the Evangeline Parish Library.
September 21, 1961
•Members of the Evangeline Parish American Cancer Society Unit elected officers and a board of directors at a special meeting held in Ville Platte. Donald A. Mayeaux, Mamou business man, was re-elected president of the Parish Unit and presided over the meeting. Other officers named for the ensuing year were Mrs. Pearl Buller, Ville Platte, first vice president; Dr. Harris Soileau, Ville Platte, second vice president; Mrs. Charles Bollick, Basile, secretary and Mrs. Fred tate, Mamou, treasurer.

September 28, 1961
• Shelia Fontenot, one year old daughter of Mr. and Mrs. Chester Fontenot of Mamou, died on 4:00 p.m. Tuesday September 26, 1961 at Mother Cabrini Hospital in Alexandria as the result of having drunk furniture polish. The tragic accident occurred Monday, September 25, 1961 and when discovered ill the baby was rushed to medical aid.