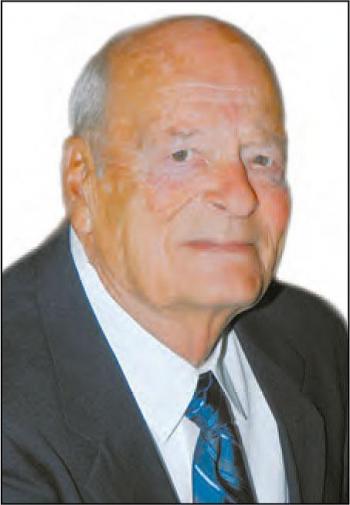 A Mass of Christian Burial will be held on Saturday, August 12, 2017, at 11 a.m. at St. Michael Catholic Church for Milo Addison Nickel, Sr., 85, who passed away on Thursday, August 10, 2017 at Our Lady of Lourdes Hospital in Lafayette. Visitation will be held at 10 a.m. prior to the services. Monsignor Charles DuBois will officiate for the services and Kenneth Privat will give the eulogy.
He is survived by his wife of 58 years, Sybil Rourke Nickel of Crowley; his sons, Milo A. Nickel, Jr. and his wife, Erin O'Carroll Nickel of Lake Charles and Mark Nickel of Crowley; his grandchildren, Milo A Nickel III, Evan A. Nickel, Joshua Graham Nickel, Ellen Katherine Nickel and Mary Margaret Nickel, all of Lake Charles, Mary Elise Nickel and Elizabeth Nickel Boulet and her husband, PJ Boulet, all of Crowley; his great grandchildren, Kate Elizabeth and Peter John Boulet, both of Crowley; and numerous nieces and nephews.
He was preceded in death by his parents, Milo E. Nickel and Minerva Ann Crane Nickel; one sister, Francis Ella Hones and his brother-in-law, Don Hones.
He was born November 10, 1931 in Chippewa Falls, Wisconsin. He attended the University of Wisconsin, Madison. He served in the United States Air Force as a Tech Sergeant flying in the Korean War.
Nickel spent his entire career in the newspaper business, beginning by working with his dad at the Chippewa Herald Telegram as Advertising Director.
In 1957, he moved to Louisiana where he worked as a sales representative with the Lafayette Daily Advertiser. Later that year, he was named General Manager of the Rayne-Acadian Tribune and the Church Point News. He was founding publisher of the Crowley-Post Herald and in 1974 he was the founding publisher of the merged Crowley Post-Herald and Crowley Daily Signal which became the Crowley Post-Signal.
Nickel was an old time newspaper man who insisted that his editors and reporters wrote straight news stories without editorializing, unlike many of the reporters who slanted news stories with their personal views.
Nickel was known for his commitment to the news and dedication to the community that he made his home for more than half-a-century. His column, "The MAN" was well received among Post-Signal readers and was known as a forum where Nickel would say "That's my story and I'm sticking to it."
He has served as President and Chief Operating Officer of Louisiana State Newspapers, Inc. which consisted of over 33 newspapers and numerous total market shoppers in Louisiana and Mississippi.
He was recognized for numerous awards with the Louisiana Press Association, which he also served as a board member. He was also a board member of the National Newspaper Association. Throughout his newspaper career he was presented awards for his dedication and service to Crowley and the Acadia Parish community and for his in-depth coverage of local events, politics and area organizations.
He was a member of St. Michael Catholic Church. He had been a member of the American Legion Post 15 and the Veterans of Foreign Wars. He had served as a member of the board of directors of the Crowley Chamber of Commerce and the International Rice Festival.
Other organizations he was involved with included Bass Anglers Sportsman Society, Professional Bass Anglers of America, Notre Dame Athletic Club, Cajun Chapter Ducks Unlimited, where he served as chairman, Rayne Lions Club and Rayne Young Men's Business Club. He was also a founding member of the Summit Group in Crowley.
He loved Southwest Louisiana and spent his leisure time enjoying what he loved most which was fishing and hunting.
His family would like to thank all those who provided for his care. They include M.D. Anderson doctors and staff, Encore Healthcare and Rehabilitation staff, Acadia General Hospital doctors and staff, Our Lady of Lourdes Hospital doctors and staff. Also a special thanks to the following doctors, Dr. Joseph Brierre, Dr. Satinder Saini, Dr. Max Trahan and Dr. Victor Tedesco.
Memorial donations may be made to St. Jude Children's Hospital or St. Michael Catholic Elementary School.
Geesey-Ferguson Funeral Home is in charge of all arrangements.