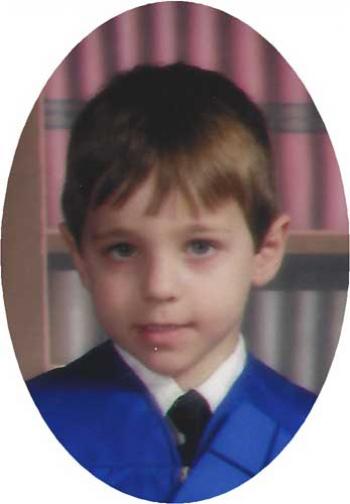 August 20, 2008 - May 11, 2014
BAYOU CHICOT - Funeral services were held for Addison Kade Coates, five, of St. Landry, at Hope Presbyterian Church in Opelousas, at 11 a.m., Tuesday, May 13. Burial followed in the Vandenburg Cemetery in Bayou Chicot.
Master Coates died Sunday, May 11, 2014. He was a bright and dynamic little boy who attended kindergarten at Bayou Chicot Elementary School. He played both t-ball and basketball with as much gusto as any major league player. There was a softer side to Kade also, he simply adored being in the company of babies, and picking flowers was something that always seemed to bring a smile to his sweet face. His favorite pastime, however, was spending countless hours playing and pretending with his precious older brother, Aiden.
Survivors include his dedicated parents, Aldridge “Kyle” and Brandi Johnson Coates Sr. of St. Landry; and his siblings, Aldridge “Kyle” Coates Jr., Aiden Jude Coates and Ashlynn Blake Coates. He also leaves behind, his paternal grandparents, Herbert Coates Jr. and Althea Gaynelle Coates of St. Landry; and his maternal grandparents, Maxie Lee Johnson and Betty Faye Johnson of Lone Pine. Addison’s beautiful smile and sweet disposition will be cherished by all whom were lucky enough to have crossed paths with him on his ever so short journey here on earth.
Pall bearers were Trent Andrus, Troy Miller, Kevin Coates Jr., Rhett Coates, Wynn Harvey, Saeed Senousy and Samir Senousy.
Revs. Dean Rydbeck, Roger Whittington, Brad Webb and Ken Gordon officiated.
Family and friends may view the online obituary and/or sign the guestbook at www.ardoinfuneralhomes.com.
Ardoin’s Funeral Home of Ville Platte was in charge of arrangements.