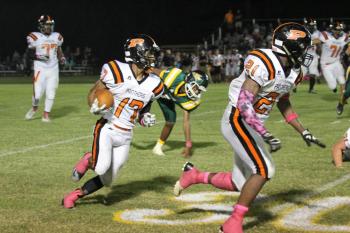 Pine Prairie Panther running back Darrien Hayes (17) runs for daylight behind the block of teammate JJ Sims (21) in a game earlier this season. Pine Prairie needs a win over Crowley tomorrow night in the last regular season game to have a chance at a playoff berth. (Gazette photo Nick Jagneaux)

One last chance for history.
That is what it has come down to for the Pine Prairie Panthers (3-6, 2-4).
As it stood on Monday, Pine Prairie was the No. 35 team in the LHSAA power ratings. In Class 3A, the LHSAA takes the top 32 teams to the post-season.
So, it all boils down to this, if the Panthers can come away with a win over the Crowley Gents on the road tonight and the stars all align correctly, Pine Prairie will have made history by making the playoffs for the first time ever. Game time is set for 7 p.m.
“First and foremost, we have to win this game,” stated Pine Prarie head coach Yves Prince. “The teams that are above us would have to lose and those teams right below us could not gain enough power points to pass us. But, if those things happen and we do happen to get into the post-season, it would put the icing on a great season.”
Beating Crowley will be a tough task for the Panthers. The Gents enter the game with an overall record of 5-4 and a district record of 3-3. However, Crowley’s four losses have come at the hands of teams with a combined record of 28-6.
The Gents average 30.8 points per game on offense and give up 12.9 points per game on defense.
“Crowley has some very good athletes,” said Prince. “Their offensive line is big and physical and they like to run the ball downhill out of the I-formation with the power. Our key is to be able to stop their run game. If we can do that we have a good shot at beating them.”
Last week the Panthers almost shocked the District 5-3A world, losing to Iota by the slim margin of 14-7. The game against the Bulldogs was scheduled for Friday night, but due to weather conditions and concern for the safety of the players, the contest was suspended until Saturday night.
“We had a number of compliments on the way we came out against Iota,” commented Prince. “The players from Mamou that came to the game told us after, that we should have won that game. Even the coach from Crowley, who was at the game, said that they were impressed by how hard our team played.”
“I know we are playing good football,” Prince continued. “But, we just don’t have the numbers that other teams do. The biggest thing for us is that we do not have the depth to finish ball games. Other teams have almost all of their players going one way, while we have a number of our players having to go both ways. I am just so proud of the way these guys never give up.”