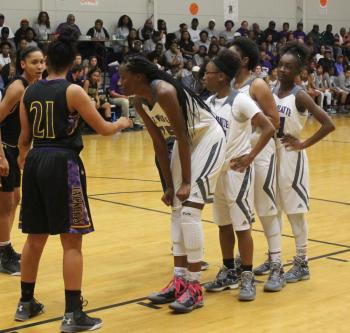 The Ville Platte Lady Bulldog offense awaits an inbound play against Iowa Thursday night in their quarterfinal match-up with the Lady Yellow Jackets. Ville Platte blasted Iowa 77-39 to advance to the Top 28 on Wednesday for the fourth time in the last seven years. (Gazette photo by Tracey Jagneaux)

VILLE PLATTE – When a team is playing at their very best, the old sports cliché “firing on all cylinders” is often used to describe that situation.
That cliché was definitely appropriate when explaining how the Ville Platte Lady Bulldogs totally dismantled the Iowa Lady Yellow Jackets here Thursday night in a 77-39 quarterfinal playoff win.
Everything seemed to work for Ville Platte from the start, including winning the opening tip. From that point on, the Lady Bulldogs dominated in every aspect of the game. By far this was the most complete game Ville Platte has played all season long.
After the game, Lady Bulldog head coach Dot Doulet acknowledged that her team came ready to play.
“After the win against Wossman in the last game, our players realized that they started way to slow,” stated Doulet. “So, tonight we came out of the gate full speed. I was so proud of the way we approached the game physically, mentally and emotionally.”
With the win, Ville Platte now moves on to the Top 28 Tournament for the fourth time in the last seven years. The Lady Bulldogs will take on the No. 1 seeded South Beauregard Lady Knights Wednesday in a semi-final game on the campus of Southeastern Louisiana University in Hammond. Game time is set for 6:15.
It did not take Ville Platte long to gain control of the game against Iowa. The Lady Bulldogs played the inside/outside game to perfection all night long, and the first quarter was no exception. After the first four minutes of play, Ville Platte owned a 10-2 lead over the Lady Yellow Jackets.
Defensively, the quickness and aggressiveness of the Lady Bulldogs allowed them to create several turnovers in their zone defense that would turn into quick lay-ups on the other side of the court. Ville Platte used the rest of the first quarter to go on an 11-9 run, making the score 21-11 as the period ended.
In the second quarter, Iowa tried to resume their set offensive pieces. However, the Lady Bulldogs would not allow any good looks at the basket.
With no low post game to speak of, the Lady Yellow Jackets were relegated to deep, outside shots. When those shots did not fall, Ville Platte was quick to respond with a running game that Iowa had no answer for.
The second quarter summed up the total domination the Lady Bulldogs had over Iowa. In that period, Ville Platte outscored the Lady Yellow Jackets 28-2. Iowa’s only score came on a buzzer beating basket as time expired. The Lady Jackets were drowning, and Ville Platte was definitely not throwing them a life preserver.
The third quarter was a little more even in terms of points for both clubs. In that quarter, Ville Platte was able to give their starters some much needed rest. As the period came to a close, the Lady Bulldogs had been outpaced 15-14 by Iowa, but still led 63-28.
In the final quarter, Ville Platte opened up a 47-point advantage to lead 77-40 at the 2:22 mark of the period. With all bench players in for the Lady Bulldogs in the last two minutes of the game, Iowa was able to reel off the final nine points of the game.
Ville Platte was led by Miya McKinney, who poured in 24 points. Tyreonna Doucet added 20 points for the Lady Bulldogs, while Jakiah Thomas added 18 points.
“One of the things that really helped us tonight was our outside shooting,” said Doulet. “When we can hit those shots, our inside game becomes so much more potent. Defensively, I thought we took away what that wanted to do. The big stage of the Top 28 should not bother us. We have been really focused on being the last team standing.”