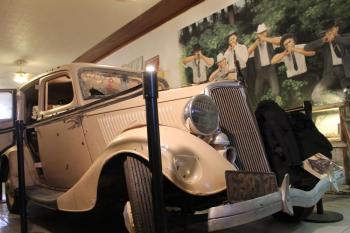 A replica of the 1934 Ford Deluxe that Bonnie and Clyde were killed in can be viewed by visitors at the Ambush Museum in Gibsland, La. A mural depicting law enforcement ambushing the two famed bank robbers faces the side of the replica car, which helps bring the events of the ambush that ended their lives to life. (Gazette photo by Elizabeth West)

The windshield of the replica car is filled with bullet holes for Ambush Museum visitors to have a better idea of what the scene of Bonnie and Clyde’s death truly looked like. (Gazette photo by Elizabeth West)

GIBSLAND -- Just before dawn on May 23, 1934 a posse of lawmen hid along a north Louisiana country road right outside of Sailes, La., in Bienville Parish. Barricaded in bushes, officers were on the look out for a 1934 Ford Deluxe car that would be occupied by two of the nation’s most wanted bank robbers -- Bonnie Parker and Clyde Barrow.
When the tan stolen car became visible to law enforcement, the police officers from Texas and Louisiana unloaded their Browning Automatic Rifles firing a total of 167 bullets at the two notorious criminals from Texas.
While Bonnie and Clyde’s lives ended that day, the story of their life of crime still continues to captivate Americans all over the United States, like Perry Carver. And, it is the two lover’s lives that a visitor to the Ambush Museum in Gibsland, La. can uncover 82 years after their dramatic deaths.
Carver, who is the owner of the Ambush Museum, said, “I bought the museum from a man that had opened it up in 2005 because I have been into Bonnie and Clyde’s story since I was eight-years-old. When my wife passed away, this became a way for me to have a new start.”
Carver travelled all the way from Atlanta, Georgia, to become the new owner of the museum that houses a variety of rare one of kind items that were owned by two of the U.S.’s most well known criminals.
As you walk through the museum, you are surrounded by newspaper articles plastered on the walls that tell the media’s story of the two-year frenzy of Bonnie and Clyde. A story however, that Carver says isn’t necessarily 100 percent true.
His opinion on how the two outlaws were characterized comes from the Georgia native’s three years of up close and personal study of Bonnie and Clyde.
“When I graduated high school my grandmother paid for me to travel across the country for three years to learn the truth about Bonnie and Clyde,” said Carver. “I was able to learn about the real people, and I realized that they were nothing like what the newspapers and movies have made them out to be.
“I was able to meet some of their family members while I was traveling. I learned that they didn’t live this glamorous life outrunning law enforcement. They actually lived a hard life experiencing injuries while barely escaping capture.”
In the Ambush Museum, visitors can learn a little more about some of those narrow escapes that Bonnie and Clyde made throughout their two year crime spree by viewing artifacts such as the bullet that was used to shoot out Bonnie and Clyde’s tire in Wellington, Tx.
Along with this bullet, the museum also has original guns from the death car, a brick from the chimney at their last hideout, lining from a vest that Bonnie owned, and the only known example of Bonnie and Clyde’s signature together, which was done on a piece of calculating machine or cash register receipt from a store owned by Clyde’s family.
Of all the original pieces in the museum, Carver’s favorite items are a pair of sunglasses that were Clyde’s and a perfume bottle that belonged to Bonnie, which was retrieved from the death car.
Although the museum has many authentic Bonnie and Clyde pieces, the car is not one of them.
However, the museum does have a replica of the car on display for visitors to see.
Carver said, “I don’t have the original car, but I do have an exact replica that people can take a picture by. We use that car to do re-enactments every year for the Bonnie and Clyde Festival held in May.”
As you view the many Bonnie and Clyde pieces that are displayed in the Ambush Museum you get a little more of a glimpse into what led to the 23 bullets that hit Bonnie and the 25 bullets that hit Clyde during the ambush that brought an end to their story. And then, visitors can view what came after the famed criminals’ bloody deaths by looking at pictures of their dead bodies that spectators couldn’t resist from taking, as well as by viewing a mock cemetery scene of what Bonnie and Clyde’s grave sites look like.
Painted over the mock grave site is a poem that Bonnie had written that perfectly depicts how it all ended.
The poem readers, “Some day they’ll go down together, and they’ll burry them side by side, to few it’ll be grief, to the law a relief, but it’s death for Bonnie and Clyde.”