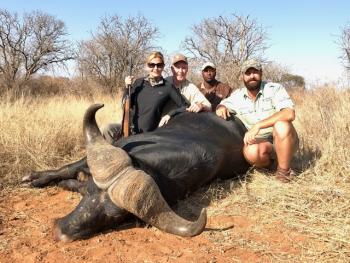 Missy Elliott (front) poses proudly with her gun in hand and with her husband Greg behind her after killing a Cape Buffalo. Also seen with the Elliott’s are their hunting guides during the trip. (Photo courtesy of Greg and Missy Elliott)

For Missy Elliott, hunting was something she started doing as a way to keep the tradition of having female hunters in her family alive. For her husband, Greg, he started hunting as a child growing up in northern Evangeline Parish and never stopped.
Together, their coupled passion for the outdoor sport has now taken them across the seas to experience hunting like never before.
The couple has traveled to an array of places such as New Zealand, South Africa, Alaska, and Spain to kill animals that they would never find at home.
However, for Missy, these hunting trips are not just about what she kills. She said it is also about just showing that she has the ability to kill.
Missy said, “In Africa, it sometimes feels like I am underestimated as a woman. They know the men can do it, but I don’t know if they think that about the women. So, for me these trips are sometimes about just proving that I can hunt just like the men.”
These trips for her husband have been about taking down the coveted “big five,” which are the five difficult to kill animals that hunters desire.
Greg said, “The big five is what hunters work to be able to say they have killed, and so it feels nice to be able to say I have killed the big five.”
Those five animals that Greg is speaking about consist of an elephant, lion, leopard, rhino, and buffalo.
While the hunts where he killed the “big five” were all memorable to Greg, it was the story of when he killed the lion in Africa that may be his favorite to tell.
“It took four days before I killed the lion. We had put out bait, and on the fourth day the lion had hit the bait. That’s how it was decided that was where the blind would be built,” said Greg.
He then continued, “We had to walk through streams to keep from making noise on our way to the blind.
“On the day that I killed the lion, we had gotten out there at around 3:30 a.m. When we made it to the blind I decided to look through my new scope and kind of pan the area. While I was doing that, Missy began to hear something that sounded like snoring. Sure enough, as I am panning the area, I all of a sudden see a lion through my scope staring at us.
“The guide said to me, ‘If you can take him, take him.’ So I did. What was funny was the fact that it took so many days for me to get that kill, but on the day it happened we weren’t even in the blind very long before it was done.”
The 40 yard kill today stands tall along the back side of the Elliott’s couch in their Beaver Creek home.
He is surrounded by the incredible zebra, bears, buffalo, leopard and many more exotic animals.
The Elliott’s home however does not only house mounted unique kills, but also your traditional deer and ducks.
The more familiar style of hunting that goes with killing the more common animals like deer and ducks are what Greg’s wife, Missy, seems to enjoy just as much, if not more, that the elaborate trips to the safari to kill different types of animals.
For Missy, hunting is always most special when she gets to do it with not only her husband, but also her son, nieces, and nephews.
Missy said, “Hunting is all about tradition for me. So, it’s getting to take my son hunting that I truly enjoy. I also love taking my nieces and nephews because I realize that if I don’t make sure that they experience hunting then who will pass it on for generations to come. I can’t let something that I always admired about my aunts die. Hunting is a way of life here and I want to see it carried on in our family.”
The Pine Prairie native then went on to say, “Hunting bonds families. My Uncle Bob (McDaniel) was a big time hunter, so every Sunday during hunting season we would discuss our hunts in church before the preacher began his sermon. It is the opportunity to bond with family that really makes this sport so special.”
The pair has now begun alligator hunting as well, which they recently did here in their home state.
As one hunt comes to an end though, the duo begins to think of the perfect place to go next. This time around they say it might be Russia.
Even as they begin to plan their next hunting trip, Missy says its important to remember that it’s not all about the kill.
Missy said, “The trip doesn’t always end how we want it to, but that is what teaches you discipline and reminds you that hunting is about more than just killing an animal. It is about preserving a way of life that is cherished by so many.”