Out of the mud 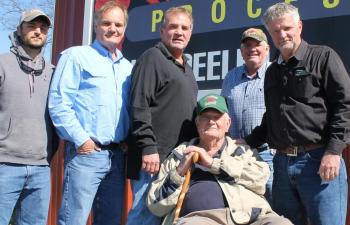 WHITEVILLE — At one time, Sylvester Crawfish Processors was a global enterprise.
Back in the late 1980’s and early 1990’s, Sylvester’s had expanded its clientele beyond the borders of Louisiana and neighboring Texas as the family-owned business had buyers in France and Belgium.
To accommodate these clients, Sylvester’s would ensure the freshness of its products by making sure each international package was filled with plenty of gel packs and ice, that way the crawfish wouldn’t die in the heat of traveling in the belly of a 747.
That all changed when a load of Sylvester’s mud bugs didn’t make its connection in Atlanta.
“They called us the next day because they were having a festival and the crawfish hadn’t shown up,” Chet Sylvester said. “So we called the airport and they told us that they had missed the flight but that they were going to put them on the next flight out. We told them that they could keep them. Eventually we got out of that part of the business.”
Sylvester’s may no longer provide crawfish for Europeans but the business has remained strong and successful for more than three decades.
Not bad for a business that happened by accident.
Family patriarch Chester Sylvester was a successful farmer, first as a dairy farmer and then later cultivating rice, milo and soybeans in the Whiteville area.
In the middle 1950’s, Chester purchased some acreage and built a pond on the property as part of clearing off the woods. For years, Chester would just allow family friends to fish in the pond, and more than a few people recommended he sell the crawfish that resided in the pond.
In the late 1970’s, Chester finally began to sell crawfish in small coolers out of the family house. It didn’t take long for him to realize that being in the crawfish business could be extremely profitable.
“They would pull up in my driveway and buy some crawfish and before they got out of the driveway they were already selling them,” Chester said.
In 1983, Chester built the plant on Highway 182 that stills stands today and helps process the nearly 3,000 acres of crawfish ponds the family business owns. In addition, Chester’s four sons Chet (60), Ted (58), Jeffrey (57) and Tim (55) have all joined him in the family business.
“That name means something to us, you know?” Chet said. “We were one of the first ones to start doing this around here. That means something.”
Added Chester, “We treat our customers like family. Our main goal is not to disappoint anybody.”
For those who devour crawfish, the only dates of importance is when crawfish season is open (typically between March to June). The operation of running an actual crawfish processing plant though is year round.
“We plant our rice and once the rice has a permanent flood (4 to 5 inches of water) on it then we can stock it with crawfish,” Jeffrey Sylvester said. “After that we have to harvest the crop and we reflood it in October. We then rent out the ponds for duck hunting and then we start harvesting in February.”
Jeffrey says that each one of the company’s ponds, depending on acreage, averages about 8 to 10 traps per acre and each fisherman works an average of 800-1200 traps.
Then the crawfish are brought to the plant where they are weighed and tagged and then placed in a cooler waiting to be sold
Sylvester’s sells its product to restaurants all across Louisiana and as far away as Houston. Yet, the business hasn’t forgotten its roots as it still proudly sells to locals right there at the plant.
“We are probably one of the few crawfish processors that allow people to come and buy crawfish at the plant for a retail price,” Jeffrey said. “That’s how we started our business by selling directly to the customers. We encourage walk-up customers.’
Added Chet, “It is tempting sometimes to shut it down because it probably would be easier but we like to interact with the people,” Chet said. “We are people people.”
The busiest time of the year for the plant is April and May, and the busiest week is Easter. Jeffrey and Chet both recommend crawfish lovers to place their orders for the holiday week well in advance,at least two weeks ahead of time.
For Chester who will be turning 85 on Saturday, the experience of having a successful enterprise is really just a bonus, compared to the time he has been able to spend with his four sons over the years.
“It’s been a pleasure to start this plant and it has been a pleasure to work with my boys,” Chester said. “I always get compliments from everybody about my boys and our business and that means a lot to me.”