Ville Platte’s Melvin found his purpose in life with rap 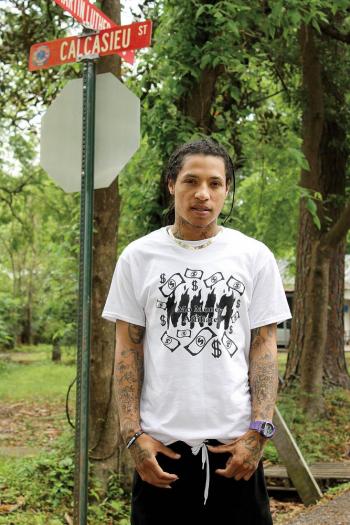 Rapper Closton Melvin, who is managed by his long time friend Chris Thomas, remembered where his passion for freestyle and rap music began as he stood on the very street that he grew up on in Ville Platte recently. (Gazette photo by Elizabeth West)

At the age of nine, fighting at school landed Closton Melvin, better known today as Git Money C, in Mr. Luther Tolston’s band class at James Stephen’s Elementary. It was there that the now 29-year old Ville Platte native first discovered his love for the art of freestyle rap and hip-hop music.
Melvin said, “I realized when I first started freestyling that through my music I could make a mad man smile. I love that about it.”
When the music was gone though, Melvin once again found himself staying in trouble, which eventually led to a five-year stint in the federal pen.
Heading down a bad road, Melvin knew there was only one thing that could turn his life around, and that was music.
Melvin said, “I heard other people freestyle in prison, and I knew that I loved putting words together like a person does when they freestyle. The art of it is my favorite thing. Plus, I knew that I didn’t want to end up back in prison, and that motivated me to spend my time behind bars constantly working on my music.”
Once released from prison in 2013, Melvin, who doesn’t write any of his lyrics down, returned home and continued working on putting the words engraved in his mind to beats that he would later record on mixed tapes.
“When I was released from prison, there was only one thing for me to do, and that was push forward and keep my mind focused on my goal,” said Melvin. “And, after a lot of work I made my first CD in 2014.”
Two year’s since making that CD, Melvin’s hard work has continued, and he is beginning to reap the benefits from his determination.
Melvin has been able to travel to places like Miami and Atlanta to showcase his talent, but one of the greatest rewards he has received recently came from the success of his rap song I Got Em, which took the #1 spot on 98.7 Kiss FM radio station in March.
Melvin said, “My mom Judy Richard called me one day, and she was hollering, “You’re on the radio!!” My whole family was excited, and that felt good. I’m still in shock every time I hear myself on the radio.”
Even in the midst of his recent success, Melvin says the struggle to continue achieving his goals hasn’t gotten any easier.
Melvin said, “I have to continue to work hard, because just like I say in my song I Got Em, as above, so below. That means when I was at the bottom it was a struggle to get to where I am now, and now that I have started moving up, the struggle is still there, but my determination to put words together that will mean something isn’t going to go away either.”
The reason why working hard through the rap game struggle has become so important to Melvin is because he has realized the opportunity success can provide him with to make a difference in the city he calls home.
“I want to give kids where I am from something new to do, and hopefully help them stay out of trouble,” said Melvin. “A lot of kids are not tough enough to play basketball at the park, and it’s those kids that end up living a grown man’s life at a young age. I want to give them a different option.”
How the Ville Platte rapper, who currently works with the music label Mo Money Affiliate, plans to give back to his community may be surprising to most. He hopes to one day build a skate park for children to enjoy.
Melvin said, “A lot of kids in the neighborhood have seen me skateboarding, and they want to learn how, too. That made me realize that my bigger dream in life is to be able to get a skate park here in Ville Platte. Me and some friends have started building skateboard ramps at my house, and I wish I could just let all the kids come over there, but my backyard just isn’t big enough. One day though, I’m going to make it happen, because I know what prison is like, and I want to do whatever I can to keep a prison cell from being in any kids’ future.”