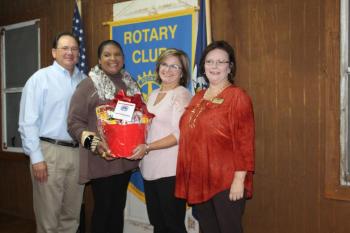 The Ville Platte Rotary Club at recent meetings heard from one of its own members about the organization’s Articles of Incorporation and heard from an insurance manager from the State Department of Insurance about free medicare counseling.
Rotarian Brent Coreil during his talk spoke about the purpose of Rotary. He said the purpose “is to pursue and carry out successful service projects based on the five avenues of service and contribute to the advancement of Rotary by strengthening membership support for the foundation and develop leaders in our community and beyond.”
He then went over the five avenues of service that are outlined in Rotary’s Articles of Incorporation including international service and acquaintance of people of other countries. “That’s something that this Rotary Club has not done in a very long time,” Coreil said. “We used to take in other Rotarians and families from foreign countries and entertain them. That was interesting back then.”
“The fifth avenue of service,” according to Coreil, “is with the youth services. Thanks to the creation of the Rotaract in our community, we are filling that purpose, and I commend Larry Lachney for being so instrumental in keeping us abreast of what’s going on with developing the future leaders of our community.”
Coreil also stated that, according to the Articles, “this club shall not express an opinion on any pending controversial measures, should not endorse or recommend any candidate for public office, and shall not discuss at any club meeting the merits or demerits of any such candidate.” He concluded, “I think our club follows that pretty well.”
The Ville Platte Rotarians then on the third Tuesday in October heard from Vicki Dufrene from the State Departmemt of Insurance about free Medicare counseling.
“I direct a program called SHIIP,” she said. “It stands for Senior Health Insurance Information Program.”
Dufrene then outlined some some the services that are offered through her program. “We do partner with organizations all over the state that serve multiple parishes that offer lots of different services such as help with prescription drugs.”
“We also work with the Medicaid office, so we have a lot of connections to be able to answer questions about going into the nursing home and applying for assistance to pay that Medicare Part B premium.”
Earlier in the same meeting, Ville Platte Rotary President Wayne Vidrine talked about the latest developments at Chicot State Park. “I’ve been hounding our lieutenant governor’s office and trying to get something scheduled,” he said. “I still don’t have anything scheduled; however, the good news is that Bernard (LeBas) was able to kidnap Billy Nungessor over the weekend while he was here for the Cotton Festival.”
“I understand that Bernard and Pat Derouselle took a ride over there and toured the lieutenant governor around Chicot Park, and I think he was a little bit shocked at some of the things that he saw,” Vidrine added. “He has promised to get involved in the situation, and I do believe that we are starting to see something happening.”