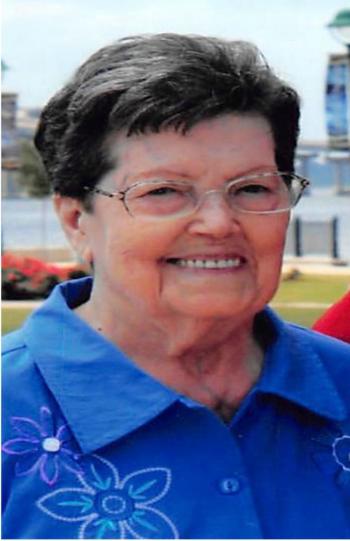 Nov. 2, 1921 - July 14, 2016
VILLE PLATTE -- Funeral services for Gladys Landreneau, 94, will be held Monday, July 18, 2016. A Mass of Christian Burial will be held at Our Lady Queen of All Saints Catholic Church at 10 a.m. with a burial to follow in the Evangeline Memorial Park Cemetery. A visitation will be held on Sunday, July 17, 2016 at Ardoin’s Funeral Home in Ville Platte from 10 a.m. until 8 p.m. and will resume Monday morning at 8 a.m. until time of services. A rosary will be prayed in her honor Sunday evening at 6 p.m.
Landreneau passed away on Thursday, July 14, 2016 at Mercy Regional Medical Center in Ville Platte.
A loving mother, sister, grandmother and friend, Gladys will be greatly missed by her daughter, Joan Latour of Eunice, brothers, Edward Reed of Eunice, Harold Reed of West Weego, La., Clevens Reed of Beaumont, Texas., granddaughter, Stephanie Latour of Baton Rouge and grandson, Mark Latour of Eunice.
She is proceeded in death by her husband, Howard Landreneau, parents, Edward and Rosa Reed, brothers, Pershing Reed and Donald Reed, sisters, Elsie Fontenot and Anice McCauley and son-in-law, Arthur Louis Latour.
Ardoin’s Funeral Home of Ville Platte is in charge of the arrangements. To view the obituary and/or send words of comfort to the family visit www.ardoinfuneralhomes.com.