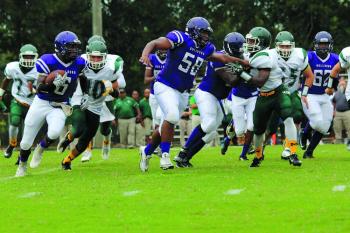 BASILE -- On what turned out to be a misty night in the land of the Bearcats, all four of the parish’s public schools came together for the annual jamboree.
The jamboree, for the most part is half scrimmage and half regular season game. It is designed to give the coach’s a chance to evaluate their players before the real season begins.
This year’s jamboree had to be moved from Pine Prairie due to some issues with the bleachers. Nevertheless, the teams got after it on the field and showcased the talent that each club fields.
In the first contest of the evening the Ville Platte High Bulldogs used the deep pass to slip by the Mamou Demons 13-6.
In the nightcap, the Basile Bearcats and the Pine Prairie Panthers each threatened inside their opponent’s territory. But, neither team could put points up on the scoreboard and had to settle for a 0-0 tie.
Here is a recap of those two contests.

Mamou vs.
Ville Platte
It was a sloppy night for both ball clubs in terms of miscues. The two teams combined for eight penalties and two turnovers in the game.
Ville Platte opened up on offense and shot themselves in the proverbial foot to begin their first possession. A false start on the very first play put the Bulldogs in a first and 15 situation.
Senior running back Jaishaun Doucet made up for that and more on the very next play, as he rumbled off of left tackle for 20 yards. However, two more penalties left Ville Platte in a first and 17 position.
Two more running plays netted a negative three yards, giving the Bulldogs a third and 20 at their 31-yard line. However a six yard connection between Brandon Veazie and Kaybrien Ardoin only gained six yards, forcing the Bulldogs to punt.
On the punt attempt, the ball sailed over Veazie’s head and he had to fall on it at the Ville Platte 12-yard line, giving Mamou superb field position to begin their first drive.
The Demons picked up nine yards on carries by Jaylen Griffith and Bernard O’Neal. On third down, the Bulldog defense hunkered down and stopped the Mamou ball carrier for no gain. Mamou went for it on fourth down, but an intended pass from Landon Deshotels to Nakrien Jack fell short giving Ville Platte the ball back at their three-yard line.
The Bulldogs tried unsuccessfully to work their way out of a hole deep in their territory, but could not muster much offense and was forced to punt the ball away again.
Mamou took over in good shape once again, beginning their next drive at the Ville Platte 46-yard line. On the very first play from scrimmage, a huge holding call went against the Demons, sending them all the way back to their 38-yard line. It was a blow that they could not recover from, as they were forced to punt.
It did not take Ville Platte long to take advantage of the Demon miscues. With the ball right at mid-field, after the punt, running back Eligia Charles took the handoff on a sweep to the right, reversed direction and scampered 46 yards down the left sideline to the Mamou two yard-line.
The very next play, Doucet plunged in the end zone for the touchdown with 1:49 left in the first half. The extra point from Veazie was not good, but the Bulldogs led 6-0.
Mamou made a valiant effort to score right before the half, as the Demons went from their 42-yard line to the Ville Platte 11-yard line in three plays. The biggest play was a 34 yard pass from Deshotels to Jack. Unfortunately, Mamou could not punch the ball in and the half ended with Ville Platte holding a six point advantage.
The second half got off to a very slow start with both teams having to punt after their initial possession of the half.
On Mamou’s second offensive series, the Demons found themselves losing yardage once again because of penalties. Mamou went from their 48-yard line back to the 42-yard line on the first two downs of the series.
On third down, Deshotels scrambled out of trouble while attempting a pass and looked as if he would pick up huge yardage. But, a big hit from the Ville Platte defense forced the ball out of his hand and the Bulldogs pounced on the fumble, recovering it at the Mamou 47-yard line.
On the very first play, Veazie pitched the ball down the right sideline, which Ardoin outjumped the Demon defenders for and sailed in for the touchdown. The extra point by Veazie was good and at the 8:48 second mark of the second half, Ville Platte had expanded their lead to 13-0.
Mamou did not back down. Starting at their 39-yard line, after the ensuing kickoff, the Demons slowly worked their way down the field.
With Quarterback Daylon Ardoin doing most of the heavy lifting, Mamou found themselves with a first and goal at the Bulldog nine-yard line. Three plays later, Griffith took it over the goal line from four yards out. The two-point run failed, however, making the score 13-6 in favor of Ville Platte.
The two teams each had one more possession, but could not garner any offense, keeping the score at 13-6.
Ville Platte will host Sacred Heart for The Tee-Cotton Bowl in week one, while Mamou travels to Oberlin.

Basile vs.
Pine Prairie
Offense was not at a premium in the nightcap, as neither Basile or Pine Prairie could put any points up on the board.
Basile took first possession of the game and looked as if they may find pay dirt early in the contest. Starting at their 42-yard line, the Bearcats picked up a 21 yard run from Andre Reed on the initial play of the drive. After another one yard run from Reed, quarterback Dawson Ashford connected with tight end Darren Chaumont on a crossing route that netted 19 more yards.
However, the next three plays could only garner six yards and the Bearcats were forced to attempt a 31 yard field goal. Abdul Mlingo’s kick did not get off of the ground high enough and it hit the linemen in front of him and was recovered by Pine Prairie at their 15-yard line.
A three and out series greeted the Panthers on their first possession, forcing them to punt the ball away.
Basile could not capitalize on the good field possession after a 32 yard punt gave them the ball on the Pine Prairie 49-yard line. A holding call and a false start penalty set the Bearcats back in side their territory. Three plays later, Dawson rolled to his right and tried to hit Stormy Comeaux on a streak route, but the Panther’s Isaiah Payne picked it out of the air for the interception.
Now it was Pine Prairie’s turn to move the ball down the field. Beginning at their 40-yard line, the Panthers utilized their huge offensive line and began to overtake the Bearcats with the run. Back-to-back 11 yard runs by JJ Sims put the ball at the Bearcat 38-yard line.
After picking up another first down at the Basile 32-yard line, Pine Prairie snapped the ball over the quarterback’s head twice in a row for a total loss of 38 yards and killed any momentum they had gained.
Basile received the ball back for one last possession before halftime and moved all the way down to the Panther 34-yard line. With only six seconds left before half, Ashford heaved a ball into the end zone for a chance to score before the horn sounded. However, Pine Prairie’s Payne was Johnny on the spot, as he came down with the ball for the interception.
Both teams were not able to do much with their first possessions in the second half, as each one was forced to punt after only three downs.
The Panthers second set of downs started out very fruitful, as they took the ball over at their 13-yard line and moved it to mid-field in just eight plays. But, a false start penalty backed them up and they could not regain the momentum they had begun at the beginning of the possession and were forced to punt.
Basile had one last chance to make something happen with a little less than six minutes left on the clock. The Bearcats took over at their 17-yard line after the Panther punt and found themselves at their 44-yard line only six plays later. A five yard loss on second and five and an incomplete pass on third down killed the drive and forced the Bearcats to punt the ball away.
Pine Prairie took over with only :25 left in the game and ran the clock out.
Basile will host Iota in week one, while Pine Prairie will entertain Tioga.