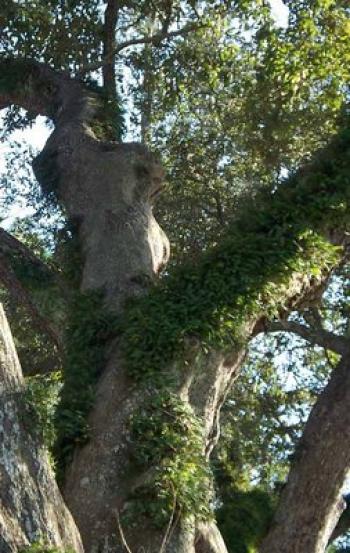 Arnaudville — Not too many Acadiana plantation homes built before Cretien Point in 1831 and Shadows-on-Teche in 1834 remain as private residences and virtually unknown to the public. Thomas and Jo Goscienski have lived in such a majestic house located at 1021 Bushville Highway in Arnaudville since 1983.

The charm of the Old South has been preserved by previous owners and the splendor is visible throughout the yard which has oaks listed with the Live Oak Society.

Several years ago I was asked by them to try to determine the age of the house. They had discussed it with architects and spent days in area courthouses without success. This looked like a great research project to undertake because it was a house my wife’s great grandfather had owned and her grandmother had been born there. Surely a house with bousillage walls, mortise-and-tenon construction (picture), an extremely old staircase, a house possibly used as a Civil War hospital, a place where a suicide occurred a hundred years ago, must have had a glorious past.

Houses of that age usually had many ghost stories associated with them and although not a believer myself, I enjoy hearing and reading such stories. Could this house be “haunted?”

The house is very uniquely constructed. The notches on the beams (picture) seem to indicate that it was built from used timber, possibly a large boat. There was much barge traffic on Bayou Teche in those days so it is possible that the builder used material from a broken ship for his house. So many interesting possibilities but so little information to go on!

Little did I realize what great a task was at hand and how many surprises were in store. After weeks at the courthouses in Opelousas and St. Martinville, translating some of the original records written in French, it was shown that the house had previously been owned by Pierre and Regina Darby Mistric (Mistrot) and was sometimes called the “Mistrot House.” Others remember it as the “Gerome Taylor” house from which the Mistric’s had obtained the property.

In 1911, the children of Gerome Taylor sold their interest in the house and seven arpents to Pierre Mistrot. On November 1920, Mrs. Aurelia Gautreaux, widow of Jerome Taylor, sold her interest in the property to Pierre Mistrot, to clarify title. On July 1982 the Mistrot heirs sold the property to Rials/Montgomery Realtors then in April 1983 it was sold to Mr. and Mrs.Goscienski.

After months of searching, an important document was located. The 1874 succession sale of the Andre Robin showed acquisition by Gerome Taylor of 66 superficial arpents on which is located the “Widow Alexis Mayer House.” Now with a solid lead, more digging in files in both parishes would be necessary with emphasis on researching the property from the beginning of the Louisiana Purchase. The early records along Bayou Teche showed a 2,000 acre grant awarded to Charles Jumonville Devillier. The property eventually was acquired by Michel Hargroder.

David Lanclos, a fellow researcher from St. Landry Parish volunteered to accompany me to the St. Martin Parish Court House to help in translating documents written in French. David had previously researched the plantation and the “Widow Alexis House” but for all those years he had assumed that it was no longer in existence. As it turned out, success was near. The very first document checked out that day was written in English. It stated “In July 1828 Sam Cochran leased from Michel Hargroder a superficial three arpents of land to build a house with the stipulation that the property would revert to Hargroder at the death of Sam Cochran.”

Mr. Cochran died in 1834 and left the property to his nieces Mary Cochran, the wife of Michael Hargroder, and Martha Cochran, wife of Andre Mayer. At one time Mary Cochran had so many debts that the property was sold in a civil suit. The “Parish Line Plantation” and the house were sold to Francois and Napoleon Robin. In 1850 the Robin’s sold the plantation to Mrs. Alexis Mayer. Hargroder, the Cochrans, and others, reached and agreement regarding partitioning of the property. In 1856 after the death of Alexis, the house and property was transferred to Andre Robin, who was the Widow Alexis’s nephew. Census data indicates that Andre Robin probably never lived in the house. Mission accomplished, a house built in 1828 but to my disappointment not a single story about ghosts in the house. Fortunately the story does not end there.

David Lanclos and I recently discussed the old “Widow Alexis Mayer House” at a genealogy meeting. Family lore was that Madame Mayer so loved her yard that her ghost still roams outside the house. “If only bousillage walls could talk,” we said. David visited the home again recently and took pictures of the house and the old oak trees. To his surprise when he developed one of the pictures he happened to see what looked like a ghost in the old oak tree. Since then many of us have visited and took more pictures of the tree. The pictures clearly show an image at the very center of the photo which looks like the shadowy figure of a woman with a sun bonnet, shawl, dress and shoes, exactly as Mrs. Alexis would have looked. She is sitting on a branch facing the road.

From stories about the widow Alesis Mayer, the image would likely be her. How spooky! A tree showing an image and a ghost of an old previous owner. Does the ghost also visit the house? If only trees could talk!