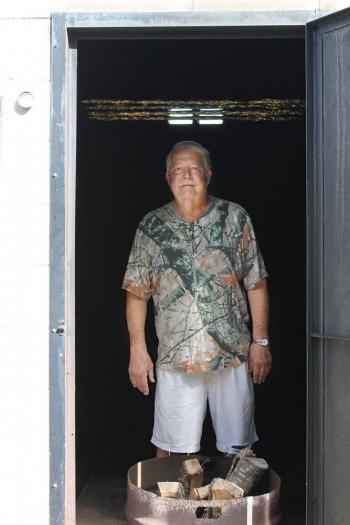 Eberle “Ebby” Perrodin stands inside the smoke house located in his backyard at his his home in Ville Platte. For many years, Perrodin competed in the Louisiana Smoked Meat Festival’s World Championship Smoked Meat Cook-Off. (Gazette photo by Elizabeth West) 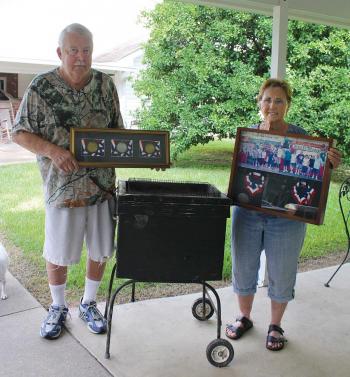 Eberle “Ebby” Perrodin and his wife Lorraine hold the medals that he has won over the years at the Louisiana Smoked Meat Festival.
(Gazette photo by Elizabeth West)

Perrodin has been passionate about smoking meats since childhood

“That very first year we entered a big storm rolled through and knocked down all of our booth decorations, but we still got out there and did what we could. We ended up winning two gold medals and one silver.” - Ebby Perrodin

It may seem a little odd to most people to have your very own personal smoke house, but when you are from the Smoked Meat Capital of the World, Ville Platte, there is nothing more perfect to have.
Just ask Eberle “Ebby” Perrodin, who built his own smoke house in 2010 right in his back yard to enjoy what he calls his “favorite pastime.”
Before discovering his love for the art of smoking meats and building a smoke house, the 65-year-old learned the craft of butchering at the age of 20 working under the guidance of Dalbis Guillory at A&P Supermarket.
Perrodin said, “Dalbis was the best butcher around, so I was able to learn a lot from him about meats and butchering. That’s when I realized how much I love working with food, especially meats.”
Perrodin then spent time working with Weelo Fontenot at A&P learning all about preparing sausage, which today he says is his “favorite thing to smoke.”
After Perrodin graduated from trade school in Ville Platte, he entered the real world and left the meat market behind. He spent time working for the Louisiana Highway Safety Commission and then for CenturyTel, which is where he retired from.
Because of the love he had established many years ago for butchering, preparing, and smoking meats, Perrodin was determined to find a way to enjoy his “favorite pastime” again, since working at local meat markets had become a thing of the past.
In 1997 Perrodin found the way to reconnect with what he loved when he and his wife Lorraine’s brother Clyde Johnson, of Bayou Chicot, decided to enter the Smoked Meat Amateur Division competition as the Movie World team at Le Festival De La Viande Boucanee, also known as The Smoked Meat Festival.
Perrodin said, “The very first year we entered a big storm rolled through and knocked down all of our booth decorations, but we still got out there and did what we could. We ended up winning two gold medals and one silver.”
Their winning dishes consisted of smoked rabbit okra gumbo, which won second place; smoked pounce, which won first place; and smoked sausage and tasso, which also won first place.
The Movie World team was hooked after that, and went on to compete four more times between the years of 1997 and 2009, and ended up bringing home several more metals for their smoked dishes.
To prepare for the competition, Perrodin said, “I would bring all of my supplies to Weelo’s Grocery & Meat Market and I would make my stuffings, and then Weelo would smoke the meats for me.”
It was from working with Weelo that Perrodin said he “was able to really watch how smoking meats was done.”
Perrodin said, “Weelo would let me watch every step of the process and it made me really want to smoke meats myself.”
After Perrodin endured several back surgeries though, competing unfortunately had to come to an end. But he couldn’t completely give up on making some of Evangeline Parishes most distinctive foods.
“Because of what I had learned over the years from Dalbis and Weelo and from practicing smoking meats with Clyde in his smoke house, I knew that I could smoke my own meats,” said Perrodin. “So, in 2010 Lorraine and I decided we would have our own smoke house built out of cinder blocks, and we haven’t stopped smoking meats since.”
When asked how often the two light the pit in their smoke house to make smoked sausage, tasso and boudin using seasoning tips that Perrodin learned from Houston Fontenot, the Ville Platte native laughed and said, “It depends on how often the children and grandchildren come over.”
Lorraine then added, “Ebby’s daughter Mandy and her kids will show up with an ice chest and fill it up as much as they can.”
Although he loves the food he makes, for Perrodin one of the reasons why he has grown to enjoy smoking meats so much has more to do with the fact that when the smoking starts, the whole neighborhood starts showing up.
“The best thing about smoking meats is the fact that when we are doing it, the whole neighborhood can smell it,” Perrodin said. “Before you know it, Coach (Bobby Soileau), Ethel (Coreil), Brent (Lafleur), and Mitch (Tate) are all showing up at the house, and it turns into us just spending the day together visiting until it’s time to start tasting everything.”
According to Perrodin, it takes all day to prepare and smoke meat and is a lot of work. But, the work he says “is worth it,” because of “how much” his “family and friends enjoy the food.”
Although he’ll never be able to compete at The Smoked Meat Festival again due to his back, smoking meats will be something that Perrodin will do for as long as he possibly can.
Perrodin said, “If I were able to, I would be competing every year at The Smoked Meat Festival, but since I can’t I’ll be smoking pounds and pounds of meat at my house until I either physically can’t or I’m dead.”